Diame: I had a good feeling with Ashley 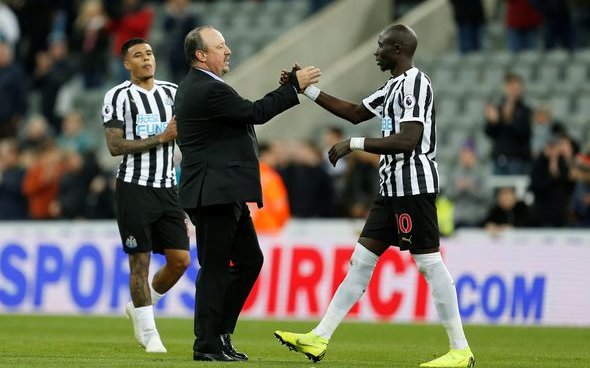 Former Newcastle United midfielder Mo Diame has suggested that he got a “good feeling” from owner Mike Ashley when he had dinner with him.

The Senegalese ace, who now plies his trade in the Middle East with Al Ahli, also claimed that he did not know enough to judge whether or not it was Ashley’s fault that Rafa Benitez left the club over the summer.

Speaking to beIN Sports, he said: “It is difficult for me to talk about things I don’t really understand, and I don’t want to judge.

“I met the chairman when we had the dinner with team and he talked to us about his life, and I had a good feeling with him.

“I can’t judge on something I don’t know a lot about, I can’t say whether it was Rafa’s fault or the chairman’s fault because I don’t know.”

Here we have the rarest of things – somebody who has something vaguely positive to say about Mike Ashley. Ordinarily, that might cause some Toon fans to question Diame and his principles, but watching the interview, you get the impression that Diame is being diplomatic because he is such a nice guy. Plus, and this is something that sometimes gets overlooked, it’s very probable that Mike Ashley is actually a fairly amicable person. He has no idea how to run a football club, and the manner in which he has treated the fanbase is pretty shocking, but if you were to meet him out of the blue or for a team meal, as Diame did, then there’s every chance that you could hold a reasonable and pleasant conversation with him. Diame is clearly speaking as he finds, and when all is said and done, you can’t hold that against him.