Crooks picks Schar in team of the week 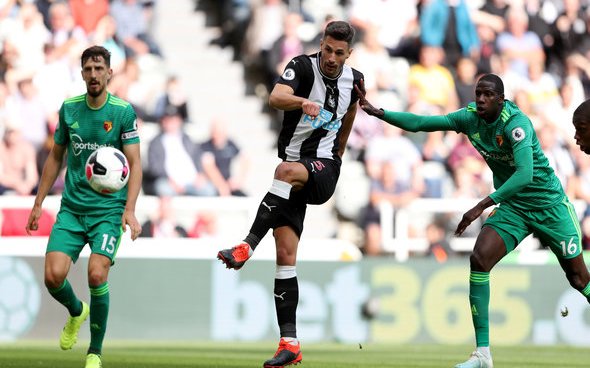 Garth Crooks has heaped praise on Newcastle United defender Fabian Schar while naming him in his team of the week after his display in the 1-1 draw with Watford.

The BBC pundit singled out the Swiss enforcer for playing a major part in the game and praised the 27-year-old for taking his goal with great composure.

Crooks was initially concerned that the Magpies wouldn’t be able to replicate the performance from the week before against Spurs when welcoming a side desperate for points to St James’ Park.

Newcastle did receive praise from Crooks for the way they didn’t panic after conceding in the opening two minutes and completed a controlled professional performance.

“I posed the question ‘could the Magpies attack with the same conviction as they defended at White Hart Lane?” Crooks wrote on the BBC Sport website.

“Well, the performance wasn’t quite as convincing but good enough to contain a Watford side desperate for points.

“Schar played a major part in this controlled professional performance by Newcastle. They didn’t panic when they went 1-0 down and he took his goal with great composure. Not bad for a centre-back.”

The Switzerland international has been in great form in the heart of defence at the beginning of the season and is fully deserved of his place in the team of the week. The 27-year-old got his goal in the end with a tidy finish in the draw but will have surely have been disappointed his side didn’t pick up all three points. Schar has proved that he is capable of scoring all types of goals in his career, but his defensive capabilities always come first. Schar has averaged 3.3 tackles per game for the Magpies so far this season, alongside 3.3 interceptions according to WhoScored – the most in both categories of anyone in the Magpies’ squad, quickly cementing his place as an integral cog in Steve Bruce’s motor going forward in the Premier League. His average of 3.3 interceptions per game also ranks his as the third-best in the Premier League [WhoScored], with Bruce surely praying his defender’s great start to the season will continue long into the campaign.