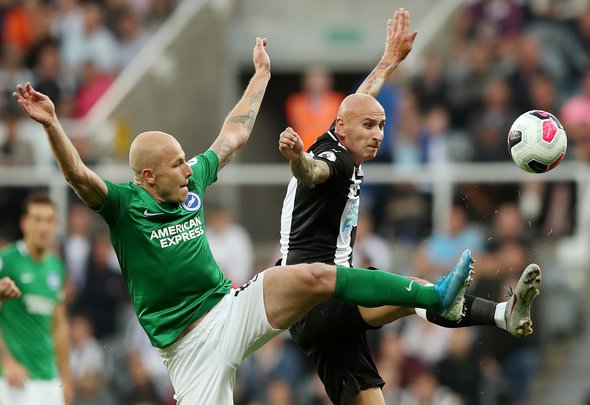 Cascarino wasn’t impressed: “Jonjo Shelvey has always been a frustration to me,” he said on talkSPORT [22/09; 07:53]. “I saw him at Charlton and always thought ‘there’s a player in there’. You know that he’s got a lot of qualities.

“But he’s so caught up in a tendency to play the miracle ball so often when it’s not on. You’re in a team game, and I don’t see Jonjo Shelvey as a team player often enough. [Isaac] Hayden is chasing his backside around trying to get close to people, Jonjo Shelvey’s not doing the same.”

You can’t really argue with Cascarino’s assessment of the Shelvey situation, can you? The former Swansea City man started off terrifically when he first came to St James’ Park, but he has gone way downhill over the past year or so. Rafael Benitez didn’t seem to trust him last season, and Steve Bruce doesn’t appear to be a massive fan either. He’s gone with Hayden and Sean Longstaff as his preferred central midfield partnership when the latter’s been fit, with Shelvey getting back in recently after the youngster’s injury. However, he’s not been able to assert his claim as a starter, producing a number of indifferent displays in the middle of the park. Cascarino feels he’s not a team player and, while that’s harsh on the face of it, there’s not a whole lot of evidence to counter Cascarino’s claim. Shelvey was poor on Saturday, failing to have any influence on the game and not working anywhere near as hard as Hayden from a defensive point of view.