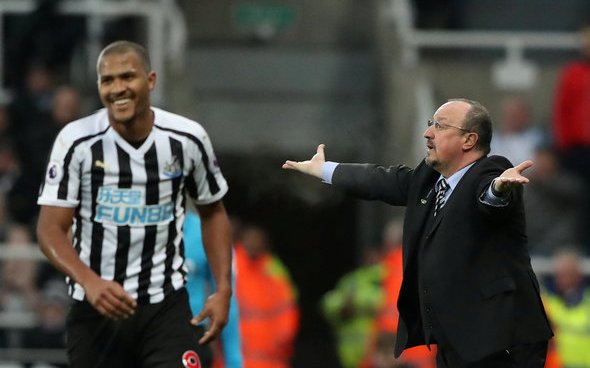 Rafa Benitez has given his verdict on who his best value signings were for Newcastle United.

The Spanish manager broke the club’s longstanding transfer record when he moved for Miguel Almiron in January, but has suggested that some of his better work in the transfer window was more economical.

When asked whether Fabian Schar, Florian Lejeune, or Martin Dubravka was his best value signing for Newcastle in a Q&A for The Athletic, he said: “I agree the three of them are quite good signings for the money we paid.

“Also I would add Rondon was good value as a loan.”

It’s interesting that Benitez should choose to pick out Rondon as one of his best value signings. It’s rare for loan acquisitions to make such a marked impact as the Venezuelan did at St. James’ Park, but there is a very good argument to be made that without him, the Toon Army would have been relegated last season. Rondon was involved in 18 goals for the Magpies last term in the Premier League, scoring 11 and assisting seven more. United only scored 42 goals in total, meaning that the South American was involved in 42.9% of all goals they registered in the league last season. When you then factor in his Whoscored rating of 7.05 in a side that struggled to avoid relegation for most of the season, it’s patently clear just how effective he was in a black and white shirt. Much like Benitez, the Magpies must be kicking themselves that they couldn’t keep hold of him.