It would seem as though it is not just Newcastle United fans who are frustrated with Steve Bruce’s leadership at St James’ Park. Some Atlanta United fans are stunned to see Bruce’s latest comments about Miguel Almiron, who the Magpies snapped up from the MLS side in January when Rafa Benitez was in charge. Almiron is yet to score or assist a goal in 17 appearances across all competitions since joining Newcastle at the start of the year and was someone who struggled to have an impact on Sunday in the humiliating 5-0 defeat to Leicester City. After the game, as quoted by beINSPORTSUSA journalist Roberto Rojas, Bruce said that Almiron is “not an out and out centre-forward or a natural number ten” and is “an old-fashioned inside forward”, despite struggling on the right-wing in recent matches. It must be frustrating for Atlanta fans to see one of their former players do so poorly in the Premier League, especially after he scored 13 goals and supplied 13 assists in 38 appearances, most as a number ten [transfermarkt] in his final season in the USA. They completely disagree with Bruce’s comments and as they have more than likely seen a lot of him in MLS, their opinion is certainly valid.

Steve Bruce on Miguel Almiron: “He is not an out and out centre-forward or a natural number ten either, he is an old-fashioned inside forward. So we have got to try and get the best out of him.”

With all due respect, that’s simply not true and I find it difficult there. #NUFC

Just willful ignorance on the part of Bruce. He has statisticians who can show him where he's most effective. Give him a free role underneath a striker, sit back and watch. He will inflict damage.

Steve Bruce is an idiot. https://t.co/TsO9GQPJNp 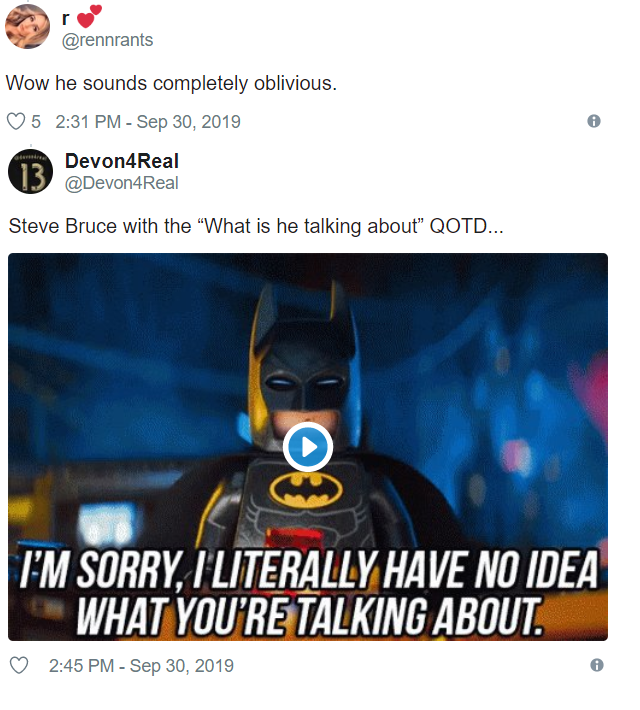