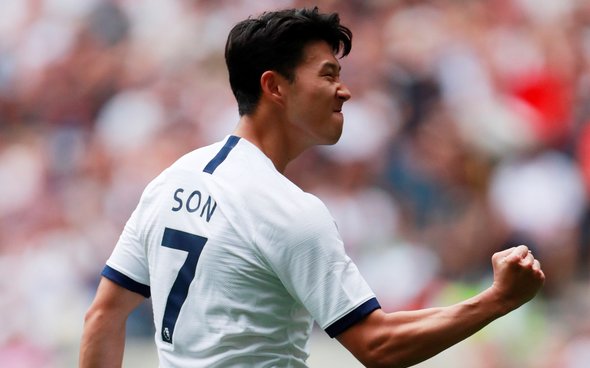 Jeff Stelling was spot on to imply Newcastle United’s defenders should be wary about facing Tottenham attacker Heung-min Son on Sunday as he will likely be chomping at the bit.

The Sky Sports presenter implied that the Magpies’ defence should be wary as he explained that Newcastle’s defenders had been given the last bit of news they wanted to hear as Spurs boss Mauricio Pochettino confirmed Son was available and in perfect condition for Sunday’s clash.

“If you’re a Newcastle defender the last thing you want to hear is that Son is available and that Pochettino says he is in perfect condition,” said Stelling on Soccer Saturday (Sky Sports News, Saturday, August 24th, 13:23).

Son hasn’t featured in Tottenham’s first two league games of the season due to being suspended, and Pochettino revealed ahead of the clash that the rest had probably done him good.

“I think he was training really, really hard to keep fit and improve in different areas,” said the Spurs boss, as quoted by the Evening Times.

“We are happy (that) in the last few weeks he was unbelievable in the way he was available to train and compete in every single training session and I hope it’s going to help the team from now.

“I think it was a good opportunity for him to build his fitness and have a proper pre-season, which sometimes when you’re involved in competition is difficult.

“Sometimes the priority is holidays and, this type of situation with him, it was clear that he was going to be suspended for two games, and the plan was to provide him with good quality training to improve in different areas and, when the moment (comes and) he is available to play, to be in the perfect condition.”

Son should be a terrifying prospect when he’s not in perfect condition and the fact he is, should have Newcastle’s defenders wary as he is capable of stealing the show on Sunday.

Son was a constant handful for his opponents as he averaged 2.4 shots per game and was more often than not accurate with his passes as his completion rate ended up at 85.6%.

Also, it’s worth noting that the 27-year-old was the Spurs player who scored the 89th-minute winner against Newcastle to see Pochettino’s side 1-0 in February.

Granted Martin Dubravka should have stopped Son’s effort but his display against the Magpies showed how he was a constant threat till the very end of the match, despite the season having been well underway and him having racked up numerous appearances.

If Son can continue to run at the Magpies for 90 minutes when not in perfect condition, imagine what he could do on Sunday.

So for that reason, Stelling is spot-on to suggest that Newcastle defenders will not be happy to see Son face them.