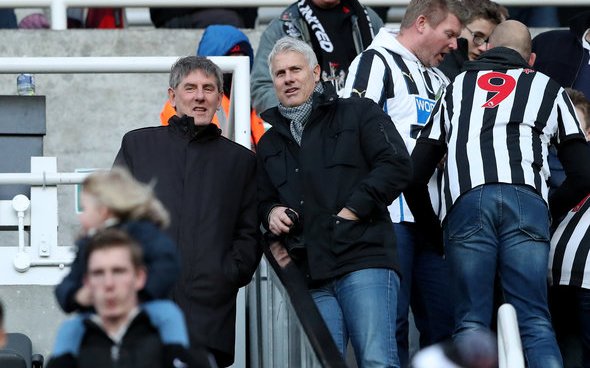 Former Newcastle United midfielder Rob Lee shared he was baffled over why everyone kept having a go at Magpies boss Steve Bruce.

The 53-year-old took to his verified Twitter account to point out that all Bruce had done was take on his dream job by becoming Newcastle boss and appeared to address Magpies fans by reminding them who the “real villain” was at St James Park.

Lee claimed Magpies owner Mike Ashley and his cronies were the real bad guys at the club, and urged fans not to forget that.

Cant understand why everyone keep having a go at steve Bruce, a true Geordie who was offered his dream job and took it, the real villain in all this is Mike Ashley and his cronies… let’s not forget that!!!

“Cant understand why everyone keep having a go at Steve Bruce, a true Geordie who was offered his dream job and took it, the real villain in all this is Mike Ashley and his cronies… let’s not forget that!!!” wrote Lee.

Bruce is getting a lot of unnecessary stick due to the mood at St James Park being at an all-time low courtesy of Ashley still being in charge of the club, but some of the criticism coming his way isn’t unnecessary. After all the Magpies boss did oversee his side lose 3-1 to Norwich City and the performance his players put in was not up to scratch, so he has to shoulder some responsibility for that. Jonjo Shelvey was the only Newcastle player to achieve a rating above seven against Norwich, as per WhoScored, and you feel his rating was only so high due to him scoring a consolation goal for his side. Also while Lee is baffled by the treatment of Bruce, it’s fair to say the Magpies boss should have been expecting a negative atmosphere upon sitting in the dugout. The 58-year-old manager wasn’t exactly an inspiring appointment, given his track record in the Premier League as well as him so far failing to win a trophy in his managerial career, and given that fans clearly didn’t want Rafa Benitez to leave after two comfortable seasons in the top-flight under him, what reaction was he expecting?