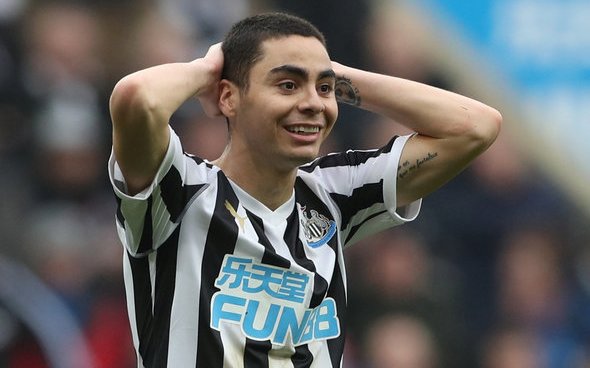 Charlie Nicholas suggested that Steve Bruce made two errors regarding his Newcastle United side in the 3-1 loss against Norwich City on Saturday.

The Sky Sports pundit shared that he found the Magpies’ display against Norwich alarming as they didn’t create much upfront.

Nicholas suggested that Bruce picked the wrong midfield pairing by choosing Jonjo Shelvey and Ki Sung-Yeung, he revealed he would have played Longstaff, and also stated that he thought Bruce got his defence wrong by playing three at the back.

“Very, very (if loss was alarming) as they didn’t really get anything upfront,” said Nicholas on Sky Sports News (17:24, Saturday, August 17th).

“Almiron again, drifts into positions, we know he is keen to get the ball and drive at people, but he hardly got any service, same for Joelinton, and you’re looking at Ki and Shelvey in midfield today…they did have a really good couple of chances in first-half, which they didn’t take.

“Kraft especially with the first one, but they make so little, and there’s no fluidity, no rhythm, Shelvey got a consolation a goal late on.

“I don’t know if this fits…Longstaff I would play. He is a composed boy on the ball, yes maybe he is feeling his way back into fitness levels, but at the back, he tried a back three and that didn’t work.

“The keeper made three or four good saves to keep them in, big concerns, the fact Steve has come in when he did, with such limited resources, yes they’ve added a few numbers in there, but he needs six games for me to get the shape right.”

Bruce should probably avoid listening to Nicholas’ remarks if he doesn’t want to feel any worse after seeing his side crash to a 3-1 defeat. After all, the Sky pundit hardly gives Bruce a glowing endorsement. In fact aside from picking apart some of Bruce’s decisions, he also suggests that things aren’t about to get instantly better for the Magpies in the near future as he claimed that he thinks it will take Bruce roughly six games to sort out the shape of his side. While in an ideal world, the Magpies could take six games to get themselves in order, potentially missing out on 18 points could prove costly at the end of the season, so realistically Bruce needs to discover his best line-up ahead of his side taking on Tottenham next Sunday. The only positive you can really take away from Nicholas’ remarks, if you’re a total optimist, then at least he thinks the Magpies can eventually get better under their current boss.