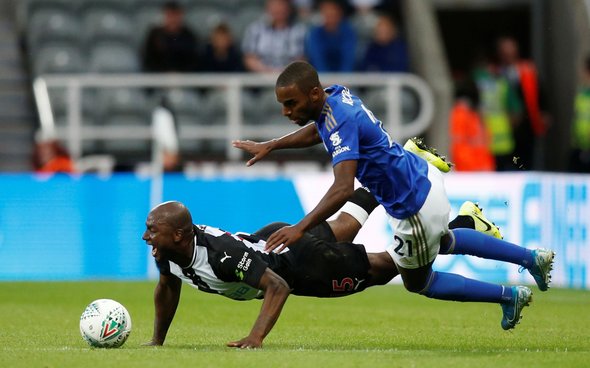 Alan McInally slammed Newcastle United defender Jetro Willems for his dramatic dive in the box ahead of Yoshinori Muto scoring against Leicester City on Wednesday.

The Sky Sports pundit fumed after watching a replay of Muto’s goal which put the Magpies back on level terms with Leicester City during their League Cup clash as he noticed Willems fling himself to the ground.

McInally shared that he thought Willems’ antics were so shameful that even Magpies boss Steve Bruce will be having a go at the player following the match.

“The goal was fabulous but I ain’t having that.

“Even Brucey will have a go at him for that surely!”

Newcastle and Leicester City drew 1-1 after normal time during their League Cup clash, with the Magpies going out on penalties after Jonjo Shelvey and Isaac Hayden failed to convert their spot-kicks.

Willems’ dive was so cringeworthy that many Newcastle United fans likely jumped behind the sofa after watching it. The 25-year-old’s actions were inexcusable and you have to hope Bruce will pull the player aside and tell him that diving like that is unacceptable and disrespectful to the badge. While Willems was likely just desperate to help his side rack up a win and knock the Foxes out of the cup, it was a step too far. The defender joined the Magpies from German side Eintracht Frankfurt earlier in the summer, and his Newcastle career hasn’t exactly got off to the ideal start. Bruce opted to bring Willems on in the Magpies’ opening Premier League game against Arsenal, but instead of playing him in his preferred position, put him in midfield. The 25-year-old ended up making the mistake which led to Arsenal scoring during their 1-0 victory, though he did average a somewhat respectable rating of 6.20 on WhoScored, and you just wonder if that has caused him to act foolishly in order to make up for his error so that Magpies fans take to him.