Hayden not 100% sure of future 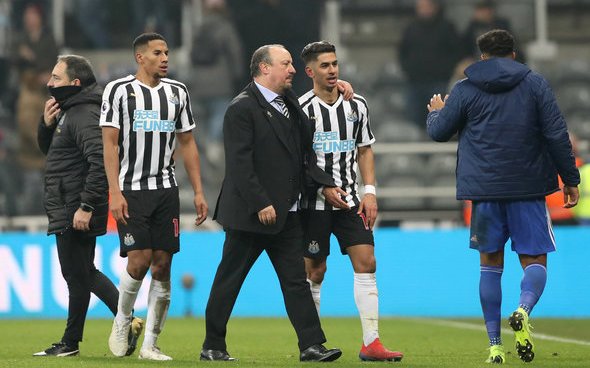 Newcastle United boss Steve Bruce publicly claimed that Isaac Hayden was up for staying at St James Park and he may have jumped the gun by doing so.

The Magpies manager delivered an update on the midfield enforcer’s future on Saturday and seemed confident that the player’s future was at St James Park.

After all not only did Bruce go on the record to say Hayden was up for staying but he also confirmed that the club have plans to give him a new contract.

“He’s up to staying. That is good news for all of us,” said Bruce, as quoted by the Chronicle.

“We hope we can tie him up to a new deal, that is in the pipeline.

“Once we get the transfer window out the road we will start some kind of negotiations.”

However, while Hayden may be open to staying at St James Park like Bruce believes, he is clearly nowhere near being ready to rule out leaving.

The 24-year-old said he couldn’t say for definite he wasn’t moving before the transfer window shut and cited football being a crazy game for why he couldn’t go on the record and say he was staying.

“The deadline is Thursday. In football anything can happen.

“I don’t know what can happen and football is a crazy game. But as I have said I have really enjoyed pre-season.”

While football is a crazy game, especially the transfer market, Hayden being even remotely open to the idea of leaving shows that Bruce may have jumped the gun to inadvertently celebrate not losing him by saying it’s good news for everyone that the player wants to stay.

The Daily Telegraph previously reported in May that Hayden wanted to leave in order to move down south, while the Chronicle also stated that the midfielder was likely to demand face-to-face talks with Bruce over his future.

And when you combine that with the fact Hayden won’t rule out a move before Thursday, it doesn’t sound like his future is 100% locked down.

Hayden impressed for the Magpies in his 2018/19 season, after a slow start to the season which saw him see red against Cardiff, and it’s important the club keeps him.

The 24-year-old assisted four goals while scoring once in his 28 outings across all competition, with him averaging a rating of 6.96 (Source: WhoScored).

Hayden did a lot of important defensive work for the Magpies in their latest league campaign as he made 73 tackles, having a success rate of 59%, and made 40 interceptions. (Source: Premier League)

Consider that only Mohamed Diame made more tackles for Newcastle than Hayden, he made 78, and he has now left the club, it shows how important Hayden is.

Yet it seems Bruce shouldn’t be celebrating keeping him until the window shuts as the midfielder himself isn’t ready to rule out an exit.