Steve Bruce must hand Allan Saint-Maximin his full debut if he wants to name Newcastle United’s best possible starting line-up ahead of their trip to Carrow Road on Saturday to play Norwich.

Saint-Maximin, 22, made a big impact when he came off the bench in the 1-0 defeat to Arsenal on Sunday with the Magpies looking a lot more likely to score with the French forward on the field than they did without him.

According to stats by WhoScored, the former OGC Nice attacker completed 100 per cent of his passes after he came on in the 66th minute and also completed two dribbles and fired one shot on target.

Sean Longstaff should be the player who is axed in place of Saint-Maximin after he had a poor game against Arsenal and both Jonjo Shelvey and Isaac Hayden played better than the 21-year-old.

Longstaff only completed 69 per cent of his passes in the midfield, which was worse than any other outfield player who started.

He also lost two of the four aerial duels he challenged for and was dribbled past on one occasion by an Arsenal player, so it would make sense for him to be the one who is dropped so that Saint-Maximin can start. 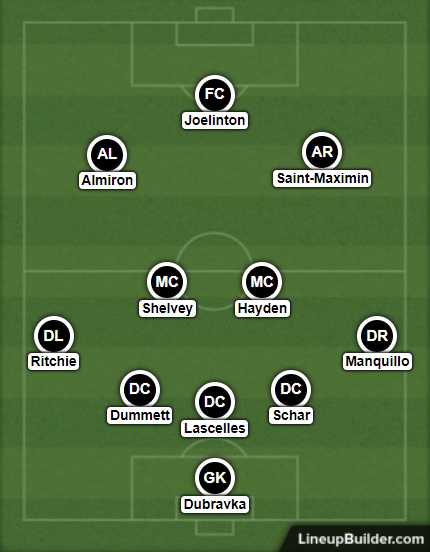 Everyone else who started against Arsenal should keep their spots with Martin Dubravka in goals behind a back five of Javier Manquillo, Fabian Schar, Jamaal Lascelles, Paul Dummett and Matt Ritchie as the left-sided wing-back instead of Jetro Willems after his abysmal showing against Arsenal.

Hayden and Shelvey should be used as the two central midfielders with Saint-Maximin and Miguel Almiron in the attack on either side of centre-forward Joelinton.

Norwich proved to have a soft underbelly when they lost 4-1 to Liverpool at Anfield last Friday and this is something that Newcastle should look to expose when they make the journey to East Anglia this weekend.

With three players in attack, two central midfielders sitting deep and wing-backs supplying options on the wings, the Magpies could be able to destroy the Canaries and get their first points on the board in the 2019/20 campaign.