The Magpies announced on Wednesday, via their official website, that Woodman had signed a contract extension with Newcastle before joining Swansea on loan for the 2019/20 campaign.

Woodman took to his personal Instagram to share he was pleased to be joining the Championship club and that it was a massive season ahead for him.

Woodman’s post saw a whole host of familiar names message him, including Sean Longstaff and Steven Taylor, but also saw former Magpies No.1, Krul, comment to tell the 22-year-old to show what he can do with the Swans. 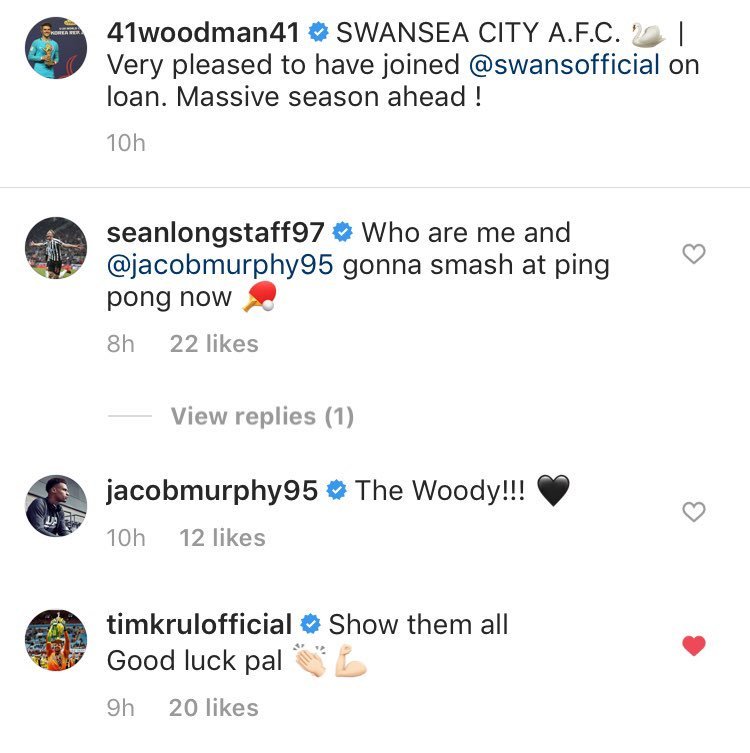 Krul knows what it takes to establish yourself as the No.1 goalkeeper at St James Park after all he played 185 times for the club during his spell with Newcastle. The 31-year-old had to rise through the ranks at the Magpies to break into the club’s first team, similar to what Woodman needs to do, so the Magpies youngster should listen to any words of advice Krul may offer him. While the Norwich goalkeeper’s message to Woodman on this occasion is basic, he is right that Woodman needs to show everyone what he can do in his loan spell at Swansea. The 22-year-old has limited senior experience and it’s time that he proved he is more than a promising youngster. While Woodman has had semi-successful loan spells previously, he featured 15 times for Kilmarnock in his 2016/17 season, Swansea are by far his biggest challenge yet. The Championship is an unforgiving league and if he doesn’t rack up clean sheets when given the nod to start, the Swans won’t hesitate to drop him. Woodman conceded 16 goals in 15 outings at Kilmarnock, 19 goals in 12 outings while at Crawley and eight goals in eight appearances when with Aberdeen, and he’ll need to have a better record to fit in at the Liberty Stadium.