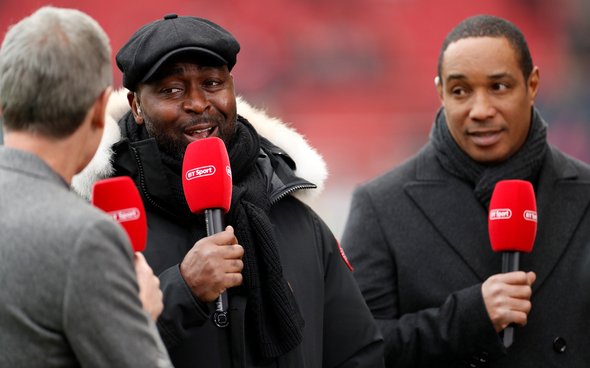 Paul Ince questioned the amount of desire that Newcastle United’s players showed during their 3-1 defeat to Norwich City on Saturday.

The former Manchester United midfielder broke down Teemu Pukki’s third goal of the match against the Magpies, and seemed dismayed by the lack of effort Newcastle United’s defenders showed when it came to trying to stop the Norwich forward.

Ince pointed out that only one Newcastle defender, Emil Krafth, was between Martin Dubravka and two Norwich players, due to three other players jogging back, and implied that players should not be jogging back at any time in football in those sort of situations.

“When I see that goal and Newcastle, there is one defender there against two Norwich players,” said Ince on BT Sport Score (BT Sport 1, Saturday August 17th, 16:32).

“The other three are just jogging back, and that can’t happen at any time in football.

“He’s (Steve Bruce) got a lot to do and obviously the fans didn’t want him there in the first place, and when you look at that…they need to show a lot more desire to get back and win games.”

Ince was spot-on to highlight the lack of desire when it came to Pukki getting his hat-trick.

After all, when looking at the goal, which can be watched on Sky Sports’ YouTube channel, both Fabian Schar and Jamaal Lascelles don’t exactly look like they’re running at full speed to help Krafth out.

So when you consider, Ince was right to question Newcastle’s desire to win, surely his verdict has alarmed Magpies boss Steve Bruce.

After all, it’s one thing to lose to a team due to being outclassed but if the Magpies weren’t truly giving 100% and going all out, then it implies a bad attitude or that they’re not playing for the manager.

The Magpies’ display on paper, also suggests they’re capable of more, as surely Bruce’s side had more than enough quality to have more than 38% of the possession and they could have easily racked up more than three shots on target. (Source: BBC Sport)

Bruce may only be two league games into his Magpies’ management career but he is already under pressure after losing both those matches, as like Ince pointed out, some Magpies supporters never wanted the 58-year-old hired to begin with.

So if the Magpies’ poor display against Norwich really was a case of them not having enough desire to win the game, you have to believe that Bruce is likely already worried about his job.