Freddie Woodman has been in good form since Newcastle United sent the young goalkeeper on loan to Swansea in the summer transfer window. The 22-year-old saved a penalty in the 0-0 draw against last season’s play-off finalists Derby a couple of weeks ago and was in fine form once again on Wednesday night as the Swans won 3-1 against QPR at Loftus Road. It is no surprise to see so many Swansea fans raving about the Newcastle loanee for his performance, especially as he kept them in the game to earn all three points. Woodman made a couple of important saves to stop the Rs from scoring more than once, although there was not much he could do to stop Jordan Hugill from getting on the scoresheet. Woodman’s only kept one clean sheet in four games for Swansea but he has only conceded four goals, and most goalkeepers would take an average of conceding once per game if it means their side is picking up points on a regular basis.

Freddie woodman is a hero

In Woodman, Rodon, Grimes and Borja I think we have the best 'keeper, center half, centre mid and striker in the league. If Ayew had a position he'd probably be best in it too. #swans

It’s impossible to pick out our best performer tonight with so many players smashing it but a special mention goes out to Celina, Rodon and Woodman. An absolutely exceptional away performance tonight, weathered the storm and got away with three huge points! pic.twitter.com/Vg5zYikyOZ 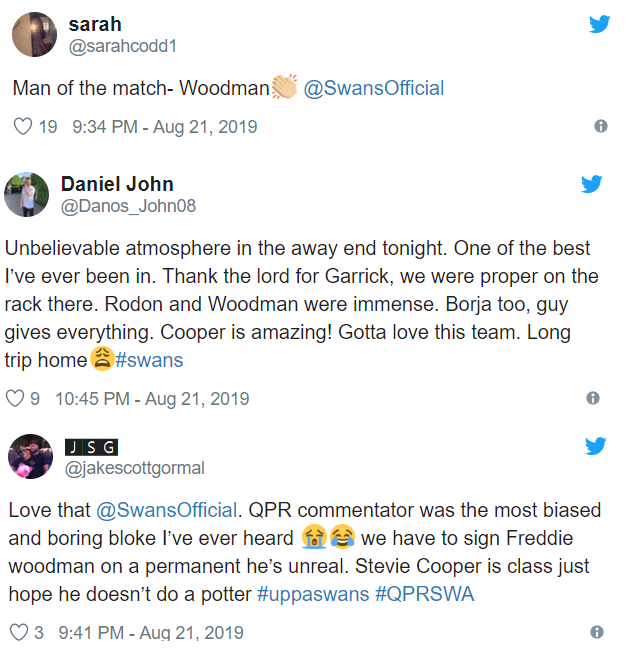