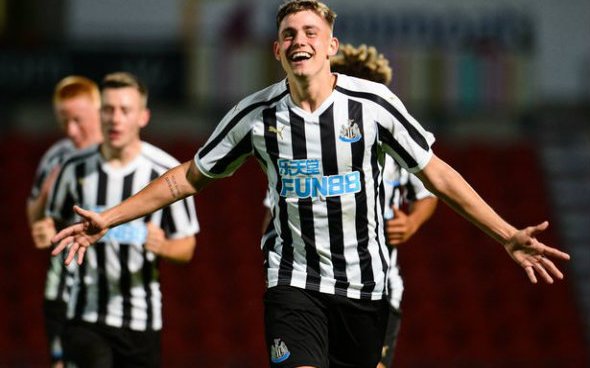 Newcastle United forward Elias Sorensen wants to stay and fight for a first-team spot this season, according to the Chronicle.

The newspaper claimed on their website that the forward wants senior football this season after consistently impressing for the Magpies’ youth sides.

The Chronicle report that Sorensen would agree to a loan exit should Steve Bruce recommend that, with plenty of League One and Two clubs interested in a temporary deal.

Sorensen featured in Newcastle’s pre-season trip to China after replacing the departing Joselu and started the second game of the Premier League Asia Trophy against West Ham in a 1-0 victory.

The 19-year-old may have travelled to China with the senior squad, but that is most likely as far as his involvement will get this season, with Bruce surely set to sanction a loan move for the young Dane. Sorensen did get a temporary move to Blackpool last season but failed to make much of an impact, returning after only one substitute appearance, something which he must go out and try to amend this season. With plenty of clubs reportedly interested, it shouldn’t be hard to find a suitor, but it will be hard to consistently score goals in his first real move into the football league. The Danish youth international did make the leap into the EFL Trophy with great effect, scoring four goals in five games, whilst also delivering a single assist, which is more proof for League One sides to take a chance on him. Shola Ameobi is in position to make sure that the 19-year-old will get consistent playing time, and he must use his new role to find the best possible move for Sorensen to go out and get valuable experience that could give him the chance to come back next season and properly fight for a chance under Bruce.