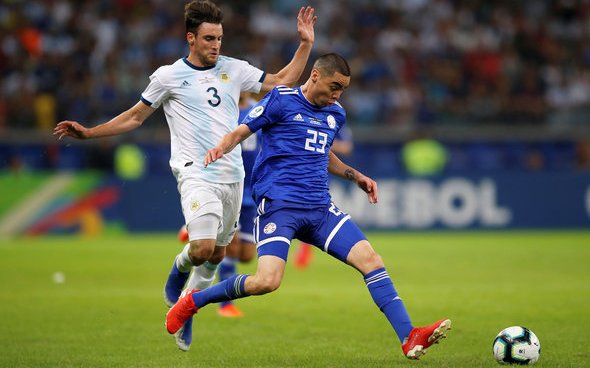 The Magpies rarely looked liked troubling the Canaries, and Shearer believes that is largely due to a lack of urgency from the Paraguayan.

Speaking on Match of the Day, as quoted by the Chronicle, he said: “Scoring goals will be a big problem for Newcastle unless they change things – and they have to change one thing. There is too much distance between Joelinton and Almiron. Joelinton had no support, he’s got to hold the ball up for too long and there’s no-one within 40 to 50 yards of him.

“Almiron hasn’t scored for Newcastle and one of the reasons why is his lack of movement. I spoke earlier about players getting into the box and gambling and he’s got to do that. He’s a forward, Newcastle need him to score and assist.

“There was no-one supporting or assisting Joelinton but Almiron has got to get further forward if Newcastle are going to score goals.”

Shearer is spot on with this one. Almiron was borderline invisible for most of the visit to Norfolk, and when he did pop up, he was too far away from his striker to properly link up. Make no mistake, Almiron was not the only player to have a bit of a nightmare, but the Paraguayan has the potential to be so special that a bad day at the office for him looks especially bad. So far this season, after two matches, Almiron has only registered one key pass, as per Whoscored. Worse than that, however, is the fact that Newcastle are still yet to score. Obviously, Almiron is not solely to blame for that, but certainly, he needs to start stepping up and doing more for his retreat in a creative sense. The sooner he can open his own goalscoring account on Tyneside, the better.