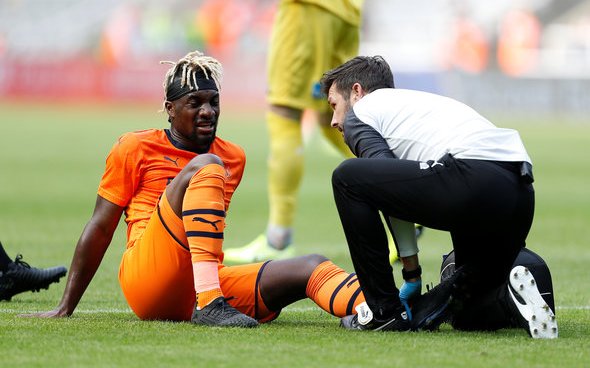 Steve Bruce has confirmed that Allan Saint-Maximin has had a scan on his hamstring and the initial signs are that it is not a serious injury.

Saint-Maximin’s full debut for the Magpies lasted less than 20 minutes when he suffered what appeared to be a reoccurrence of a hamstring injury in the 1-0 win against Tottenham on Sunday afternoon.

Since the win in London, the 22-year-old forward has had a scan and while there is no serious injury, it remains to be seen what the full extent of the setback is.

“We’re waiting to let the hamstring settle,” said Bruce, as quoted by the Chronicle.

“The initial scans say it is not serious but we won’t know the severity of it until later.”

Hopefully Saint-Maximin is not out of action for long, but the 22-year-old did not look at all comfortable when he walked off the pitch at the Tottenham Hotspur Stadium on Sunday. When he played against Arsenal in the first match of the season, Saint-Maximin looked like a quality player who wanted to get on the ball and run at defenders at every chance he had. However against Spurs, you could tell almost straight away that something was bothering Newcastle’s new French attacker. There were a few moans and groans when he failed to properly chase down one ball but it soon became apparent that Saint-Maximin was suffering. Maybe he returned to action too soon after a similar injury kept him out of the defeat at Norwich, or maybe it’s just one of those things. As long as he is not out for long, it’s not terrible news because at least Christian Atsu showcased he can step in and play well when called upon.