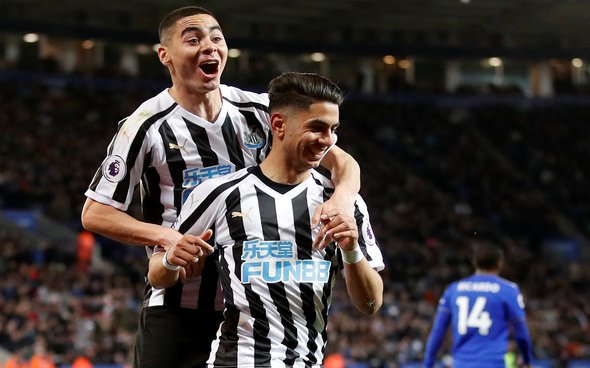 Charlie Nicholas has predicted Newcastle United to beat Norwich City on Saturday, and has identified Miguel Almiron as a potential “star” for the Magpies.

The Toon Army started the season with a 1-0 defeat to Arenal, while the Canaries suffered a 4-1 loss at the hands of Liverpool.

And Nicholas is backing Steve Bruce’s men to compound that misery this weekend.

Speaking to Sky Sports, he said: “This is an absolute belter. Norwich knew Liverpool was a free-swing. It could have been more for Liverpool. Teemu Pukki getting a goal was good for him. His movement is very good.

“Newcastle were giving themselves high-fives for clearing balls last week and I didn’t understand that. I cannot congratulate someone for being vulnerable defensively. Steve Bruce is not as not organised and thorough as Rafael Benitez. He doesn’t play that game. He will be saying: ‘have we shown much going forward?’

“You always thought Arsenal were going to win the game. Bruce is quite good at manipulating teams especially away from home. Miguel Almiron looks quick and will be the star here.”

Nicholas predicts a 2-1 win for Newcastle.

The Toon Army will be hoping that Nicholas is right about this one. This game may come early in the season, but it has the potential to be a real make or break fixture for United. Win this, and suddenly things don’t look too bad, with a raft of new signings and three points from six on the board. Lose, however, and the mood on Tyneside will drop even deeper than it already has. As for Almiron, you can’t help feeling that he needs a goal. The Paraguayan has looked bright since coming in from the MLS, and was decent again last weekend, registering two shots on goal, one key pass, and two successful dribbles, as per Whoscored. There are still question marks over his end product, however, and until he gets himself on the scoresheet, those are going to keep on lingering. All things considered though, a Toon win seems like a fair prediction.