Newcastle United have needed for some time – and still need – an attacking spark. That was evident under former boss Rafael Benitez and it remains true with Steve Bruce in charge.

The issue has been addressed somewhat by the summer signings of attacker Joelinton and winger Allan Saint-Maximin, but the losses of Salomon Rondon and Ayoze Perez have the club all square at best from where they were last season.

One player who would certainly elevate the Magpies attack is Hull City winger Jarrod Bowen, a player the Shields Gazette reported Newcastle have watched extensively over the years, although someone with a hefty £20million price tag.

The Englishman is the sort of player who would spark any attack into life, a wideman who scored 22 league goals in the Championship last term to go with four assists.

Unfortunately it would seem that Newcastle’s scouting missions will all have been for naught – in this window, at least. The Hull Daily Mail reported on Tuesday that the Tigers are increasingly confident that Bowen will still be at the KCOM Stadium after Thursday’s transfer deadline.

That’s bad news for Bruce’s side, despite the Saint-Maximin signing. It’s going to take time for the Frenchman to adapt to English football, and from the noises coming out across the Channel he is a rather inconsistent player anyway.

That then leaves Miguel Almiron – who is yet to score for the club – Christian Atsu, Matt Ritchie and Jacob Murphy as the support options in midfield for club record signing Joelinton.

Bowen, though, is more dynamic than any of them. As per WhoScored.com, not only did he score more goals than Almiron, Atsu and Saint-Maximin combined last season, but he averaged more shots per game and garnered more Man of the Match awards than any of them.

Clearly this is a player who would have been an ideal signing for Newcastle, but one that looks to be moving further and further away from becoming a reality. 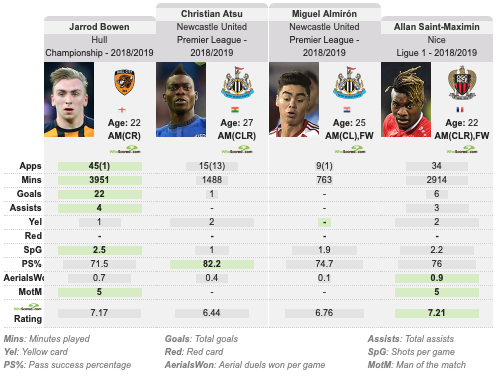