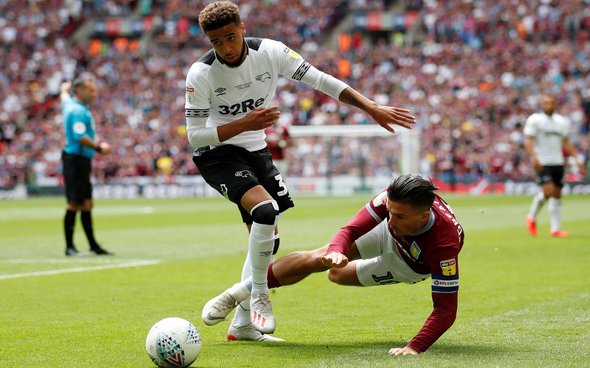 Newcastle United are among a clutch of clubs in pursuit of Derby right-back Jayden Bogle, according to TeamTalk.

The news outlet claims that the 19-year-old defender could be on the verge of a move to the Premier League after an unnamed top-flight club made an approach to sign him.

As well as Newcastle, it is understood that Aston Villa, Crystal Palace and Brighton are also interested in Bogle, who enjoyed a stellar breakthrough season at Pride Park last term under the charge of Frank Lampard.

It will be interesting to see whether or not the England Under-20 international is involved in Derby’s season opener against Huddersfield on Monday night amid this latest speculation.

Newcastle could definitely do with a new right-back before the summer transfer window slams shut on Thursday and Bogle is a good young defender who could be an instant upgrade on Javier Manquillo and DeAndre Yedlin. Manquillo has had a solid pre-season for the Magpies but he is still someone who is prone to errors and he makes up one-half of a poor selection of right-backs for Steve Bruce to choose from. Bogle made 50 appearances in all competitions for Derby last season as they reached the Championship play-off final. He impressively scored two goals and supplied nine assists in those outings and according to stats by WhoScored, Bogle had a better pass completion ratio than Yedlin and Manquillo and also averaged more key passes, successful dribbles and shots at goal per league appearance. Although Newcastle’s two right-backs did better in most of their defensive duties, Bogle is an exciting, forward-thinking right-back who could be a superb addition to Bruce’s squad.