Newcastle fans will be pleasantly surprised by Collymore’s PL prediction

For the most part, this has been a summer of negativity for the Newcastle United supporters, which has led to the Magpies emerging as a popular pick for Premier League relegation this season..

The departure of a world class manager in Rafael Benitez and Steve Bruce’s subsequent installation as his successor has meant that the north east giants are joint fourth favourite with Sky Bet to be relegated from the top flight.

Only newly promoted outfits Sheffield United and Norwich City and strugglers Brighton & Hove Albion are considered more likely to drop down to the Championship than Bruce’s side, while Aston Villa and Burnley have the same odds as the Magpies.

Former England international Stan Collymore, however, likes the team’s chances of staying in the Premier League. On Saturday he predicted on his personal Twitter account that Newcastle would finish in 15th place this campaign, something which will likely come as a pleasant surprise to the club’s supporters.

Looking at those odds once again, though, can we really consider teams like Crystal Palace and Southampton safer propositions than Newcastle?

The former have lost their Player of the Year from last season in Aaron Wan-Bissaka and may still lose star attacker Wilfried Zaha, while the latter skirted with relegation last time out and have done nothing to improve their hazardous defence this summer.

Collymore believes that the Eagles will find a way to finish above the Magpies in 14th, but he does agree that the Saints could be worse than Bruce’s team. He predicts they will end up in 17th place.

Amid the defeatism and negativity that has clouded Newcastle this summer, it will come as a refreshing and pleasant surprise that Collymore isn’t one of the many expecting them to lose their top flight status this season. 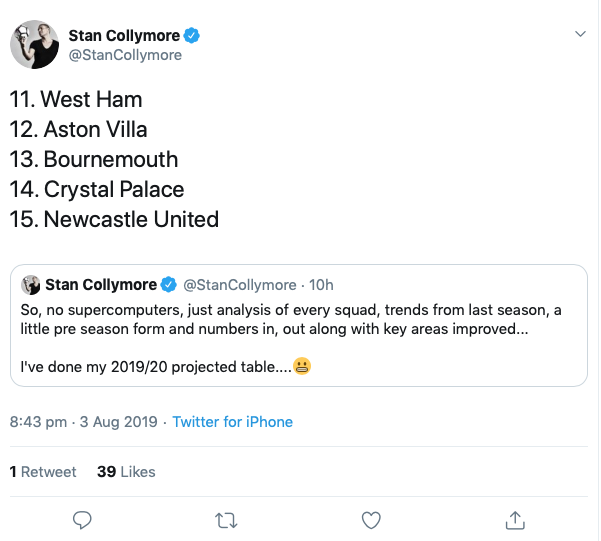