Newcastle United’s transfer window is balancing on a knife’s edge. Make no mistake, nothing will make up for the Magpies letting Rafa Benitez go, and the decision to allow Ayoze Perez to leave, especially having already lost Salomon Rondon, will take some getting over from Toon fans. That being said, spending £40 million on Joelinton could prove to be a masterstroke, and if the Magpies can get their act together and snap up another couple of players before the end of the window, a summer that looked for so long as if it was set to be the nadir of the Toon Army’s recent history might just be salvageable. The latest name linked with a move to Tyneside is that of Manchester United defender Axel Tuanzebe, as reported by the Daily Mail, with the outlet claiming that any potential deal hinges on the Reds snapping up Harry Maguire from Leicester City. The 21-year-old played under Steve Bruce during two seasons on loan at Aston Villa. and was largely impressive in the Championship, averaging 2.15 tackles per game and 3.85 clearances during his time there [Whoscored]. For their part, however, Toon fans don’t seem best pleased with the link, with most growing increasingly frustrated at a series of transfer reports that don’t seem to lead anywhere. 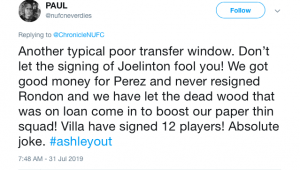 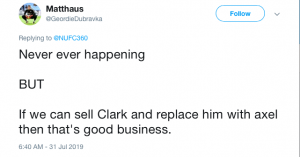