Longstaff has to improve after shocker v Arsenal 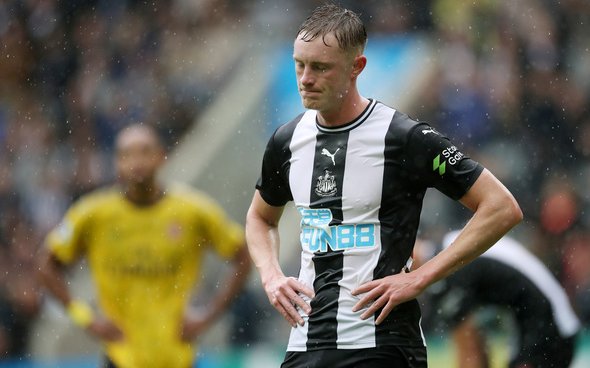 Sean Longstaff is adored by Newcastle United supporters but his performance in the 1-0 defeat to Arsenal at St James’ Park on Sunday was nothing short of dreadful – especially after being linked with a big-money summer move to Manchester United.

ESPN reported last month that Newcastle and Man United have held negotiations about Longstaff, 21, but the Old Trafford giants were unwilling to table a bid due to a whopping £50million price-tag that had been placed on the midfielder’s head.

Longstaff had only made nine Premier League appearances in what was a breakthrough season for the Magpies academy product last time out but Lee Charnley reportedly pointed out how much the Red Devils had paid Crystal Palace for Aaron Wan-Bissaka.

Wan-Bissaka, 21, is the same age as Longstaff but had already made 42 Premier League appearances for Palace before Man United splashed £50million on him in the summer transfer window.

The right-back has also had a relatively injury-free career to date while Longstaff had his 2018/19 season ended in March when he picked up an issue with his knee.

Newcastle were well within their rights to want £50million for Longstaff but The Sun reported later in July that Man United were ready to bid £30million for the inexperienced midfielder.

That would have meant Man United were paying £3.33million for each one of Longstaff’s appearances in top-flight football – an offer that would usually turn heads at board level.

However Newcastle stood firm and were reportedly undeterred over their £50million valuation.

After Sunday’s defeat to Arsenal, Longstaff showed signs that could suggest managing director Charnley made a costly mistake in his negotiations with Manchester United.

According to stats by WhoScored, Longstaff completed just 69 per cent of his passes – only goalkeeper Martin Dubravka had a lower pass completion percentage.

He completed just 18 passes before he was taken off in the 67th minute. In comparison, Jetro Willems, who came off the bench in the second-half completed 13 and none of Arsenal’s starters completed fewer than the 21-year-old.

Longstaff also won just 50 per cent of his aerial duels and while he did complete three successful tackles in four attempts, he was dribbled past on one occasion by an Arsenal player.

It was not a great day at the office for Longstaff and although it’s early days in the 2019/20 season, it is already looking as though Newcastle missed out on the chance to bag £30million for their inexperienced ace.