Newcastle United are interested in a deadline day move for Bordeaux attacker Francois Kamano, according to L’Equipe.

The French newspaper claimed in their print edition [Thursday, August 8, page 4] that the “door is open” for Kamano, 23, to leave to Ligue 1 club this summer and a move to either Italy, or St James’ Park, is on the cards. 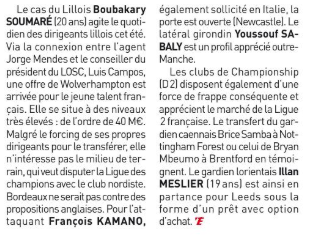 In England, the summer transfer window slams shut at 5pm on Thursday for Premier League and Championship clubs.

Newcastle would have to make one major eleventh-hour push if they wanted to snap up Kamano before it’s too late.

Kamano was in top form for Bordeaux last season as he scored 13 goals and supplied four assists in 51 appearances across all competitions. The Guinea international hit the back of the net against teams like Monaco, Marseille and French Cup winner Rennes, so he is certainly someone who enjoys the big occasions. However Newcastle simply do not need another right-sided winger before the deadline passes. Allan Saint-Maximin plays a similar role to Kamano and has already been snapped up by Steve Bruce, so why would he be allowed to spend more money on a player he does not need? Newcastle have weaknesses in their squad and could still look to buy a couple more before the deadline. However Kamano is someone who they should avoid. He’s a good player but with Saint-Maximin on board, there’s no point in pursuing the former Bastia attacker any more. Maybe he should be watched over ahead of next summer, or January, if they need him.