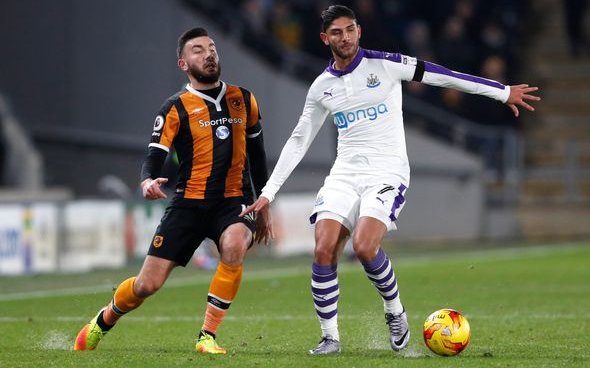 With the transfer window shut for Premier League clubs, Newcastle United need to shift their attention to selling some of their so-called deadwood.

Players such as Jack Colback and Rolando Aarons spent last season in the Championship and made it clear that they aren’t ready for consistent football in the top-flight.

A player that has never once made a career at the Magpies is Achraf Lazaar, the Moroccan international never making an appearance in the Premier League despite being at the club for three years.

The 27-year-old has only managed to make 10 senior outings for the North-East club and was not involved in Steve Bruce’s first 25-man squad this season.

Lazaar was reported by the Chronicle to have attracted interest from around Europe with FC Utrecht and Fiorentina being linked with making a move for the rarely-seen wing-back.

Newcastle must do all they can to seal an exit for the 27-year-old before the European deadline which remains open until the beginning of September.

Lazaar’s £9,000 weekly wages [Spotrac] quickly add up, and the defender has been cashing in his wage every week despite the fact he has only completed 578 minutes for the Magpies.

A player that has only featured 10 times despite being at the club for three years or more is one that certainly doesn’t have a future, and one that must take the hint in some way to find a new club himself as well.

Newcastle fans seemed to agree with that, with many of the Magpies’ faithful slamming Lazaar for his performance against Wolves in pre-season, with many of those surely relieved to see him closing in on an exit.

Lazaar spent a small part of the season under Bruce at Sheffield Wednesday and did impress when averaging 1.8 tackles and 4.3 interceptions during his time there, according to WhoScored.

Although he did impress, it was clear that the Championship was the highest level his game was going to progress too in England – with a move into Europe definitely the most likely.

Newcastle must bin Lazaar in the final week of the transfer window, and make the Moroccan a distant memory in Tyneside.