Steve Bruce has defended his squad selection for the opening day game against Arsenal after naming four defenders on the Newcastle United bench.

Newcastle laboured to a 1-0 defeat at St James’ Park on Sunday, with Bruce explaining a number of his starting 11 were suffering from problems before the game.

The Magpies’ boss revealed that Paul Dummett was suffering from a knock and that captain Jamaal Lascelles wasn’t feeling well, but both still managed to complete the full 90 minutes.

Bruce confirmed as quoted by the Daily Mail journalist Craig Hope on his personal Twitter account that having Ciaran Clark, Jetro Willems, Emil Krafth, and Federico Fernandez all the bench provided suitable cover to the doubtful duo. 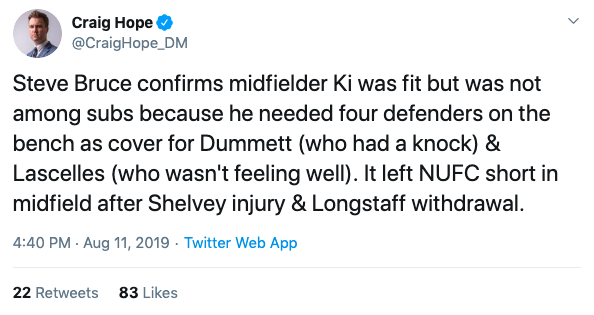 Bruce didn’t do himself any favours with this questionable decision on his first competitive game. Yes, Arsenal carry a great attacking threat, one of the best in the Premier League, but to have four defenders on the bench to cover two players just doesn’t make sense – and his decision quickly backfired when Newcastle were crying out for someone to come off the bench and help another substitute Allan Saint-Maximin push for an equaliser. It was further highlighted when Jonjo Shelvey was replaced by Willems, a left-back, and what followed was five minutes of tactical craziness. Bruce looked bewildered when Willems started operating in the heart of midfield and was forced to scream instructions to the Dutchman to move to left-back. That meant Matt Ritchie moved central and from that point on, apart from a few corners, Newcastle never once looked like equalising. The decision to name a defensive bench came back to haunt the Magpies, who never really stood a chance after going a goal behind. It isn’t a vote of confidence when you turn around and see four defenders on your bench, and Bruce must learn from this mistake and be much more positive as the season continues.