Atsu should be last resort for Bruce despite comeback 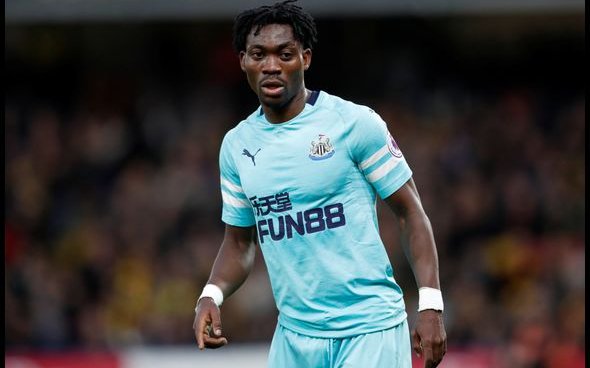 There are plenty of players who have divided opinion throughout the years for Newcastle United – usually, attackers who both infuriate and inspire with their performances.

Unfortunately for Christian Atsu, he falls firmly into the category of someone who has the Toon Army tearing their hair out with few moments of magic to look back on.

He has become something of a forgotten figure over the summer courtesy of an injury suffered on international duty, meaning he has not been used by Steve Bruce in either the warm-up games or their opening Premier League fixtures.

However, having been pictured back in training on Tyneside, Football Ghana claims that it is likely the 27-year-old will return to the squad against Tottenham on Sunday.

However, he really should be the last resort for Steve Bruce after a bitterly disappointing 2018/19 campaign, with the likes of Allan Saint-Maximin, Matt Ritchie and Miguel Almiron ahead of him in the pecking order.

A winger with one goal and no assists in 28 appearances hardly inspires confidence and he is not going to be the answer against a Tottenham side chasing a top-four finish once again.

Some might argue that a tangible final product is not everything but his overall contribution does not paint him a better light.

As detailed by WhoScored, Atsu managed to average less than one successful dribble and was dispossessed over once per game in the Premier League, while his record of 0.3 crosses is dire reading for a wide man.

Newcastle need quality to serve Joelinton up front and Atsu just has not shown the necessary talent to make that difference in the top flight. Any return to the side should be an enforced one.