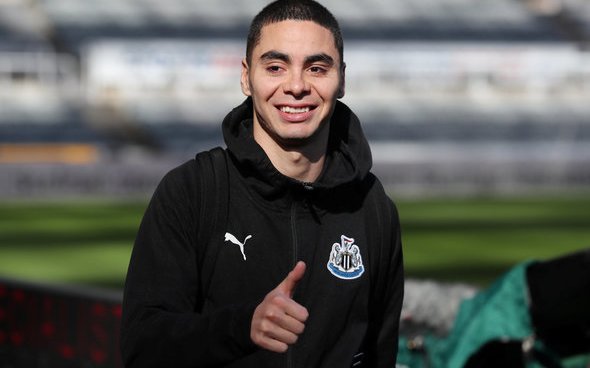 The signing of Miguel Almiron well and truly started a new era at Newcastle United under the ownership of Mike Ashley.

Almiron arrived at St James’ Park in January and broke the club-record incoming transfer fee that had stood since 2005 when the Magpies secured the signing of Michael Owen.

That led to a summer of spending, with Newcastle being the ninth highest spenders in the Premier League, a surprise to many after Ashley’s recent lack of activity in the market.

The Paraguay international especially arrived with a reputation after excelling in the MLS with Atlanta and has failed to make a similar impact since. Almiron was involved in 41 goals during his two seasons in America but has yet to register a goal or assist during his 11 outings for Newcastle.

Steve Bruce’s arrival in the North East has brought along change for Almiron, and in the Premier League opener against Arsenal on Saturday, the 25-year-old was pushed further forward to partner Joelinton.

Almiron recently revealed in an interview on Newcastle’s official club website that he was relishing the opportunity to push further forward.

“I think this position the manager is asking me to play now is a position I feel very, very comfortable in – I like playing there,” he said.

Whether Almiron has been a goalscorer or not before in his career, the time has come for him to start adding that to his game with Newcastle desperate for goals after losing their two top-scorers from last season.

Last season, the attacker averaged 1.9 shots per game and continued that trend when having two shots on goal against Arsenal according to WhoScored, and Almiron has no excuse to continue his apparent goal drought.

It is all good relishing the chance to push further forward, but with that comes added responsibility and Almiron must start adding goals to his game as soon as possible.