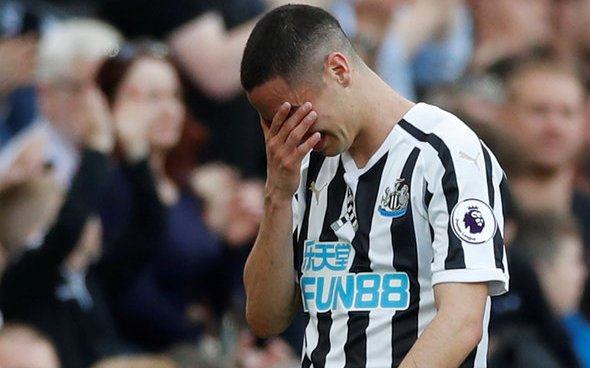 Stuart Pearce appeared to try to ring the alarm over the form of Newcastle United attacker Miguel Almiron on Thursday and surely he is acting too hastily by doing so.

The retired defender shared he thought the 25-year-old attacking midfielder struggled to score after being signed in January from Atlanta United, and claimed that was alarming.

“They’re pleased with him, the fans like him, but he can’t find the back of the net and that’s a little bit alarming.”

Pearce is being way too harsh on Almiron as after all he has only featured 10 times for the Magpies.

The 25-year-old joined Newcastle in January and of course, it was always going to take him time to settle into life in the Premier League, so it’s not actually concerning that he didn’t score before the season ended.

Almiron only completed 90 minutes in four of his 10 league outings, with Rafa Benitez easing him into action, and then he was dealt a bit of bad luck as his season was cut short by an injury.

There’s no saying that with him hopefully now more settled at St James Park, that he can’t be among the goals as soon as the 2019/20 campaign begins.

After all, while Almiron didn’t score, he did show glimpses of his attacking talents.

The 25-year-old averaged 1.9 shots per game during his Premier League outings, as stated by WhoScored, which is 0.4 more than Ayoze Perez did and the Spaniard ended up finishing as the Magpies’ top scorer with 13 goals.

So it’s not like Almiron isn’t getting in the right positions to have shots on goal, and it wouldn’t be a surprise if once he scores his first, the floodgates open.

After all, the 25-year-old was clinical when featuring for Atlanta in 2018 as he scored 12 league goals in 32 outings, and you don’t exactly lose your goalscoring instincts just because you change leagues.

When you consider this, Pearce is too quick to try to panic people over Almiron’s goalscoring form and he should only consider hitting the alarm bells if the Paraguayan doesn’t find the net in the first few months of the season.