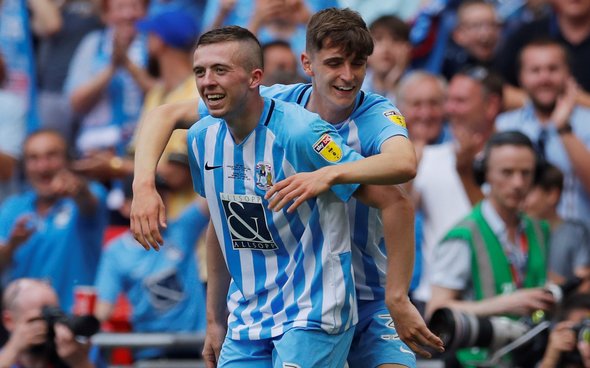 Newcastle United have inquired about signing Coventry City midfielder Tom Bayliss but are yet to make a formal approach, according to Sky Sports.

The broadcaster’s live Transfer Blog (14:46) claims that the Magpies and Sheffield United are among the Premier League clubs to have made contact regarding the 6ft tall central midfielder. (Source: Transfermarkt)

Sky Sports report that Coventry City are resigned to losing Bayliss if a club matches the £3million buy-out clause in his contract.

It is believed the League One club feel exposed due to the terms of the midfielder’s contract and it is understood they will insist on a sell-on clause in any potential deal.

Bayliss is viewed as a rising star at Coventry and could be a shrewd signing. The 20-year-old featured 41 times in his 2018/19 campaign and was able to contribute three goals as well as three assists in his outings. Bayliss also regularly featured for Coventry in his 2017/18 campaign, when they were in League Two, and ended up scoring six goals as well as getting four assists across the 32 outings he made across all competitions. So with that in mind, the 20-year-old has more experience than most do in his age bracket. However, excelling in League One and excelling in the Premier League is a different kettle of fish. Yet that said, Sean Longstaff previously proved to the Magpies that it is possible to step up from England’s third-tier to feature in the top-flight with ease. The Magpies midfielder played 42 times for Blackpool in League One in his 2017/18 campaign before featuring under Rafa Benitez at St James Park in his latest season. Longstaff appeared nine times in the Premier League averaging a rating of 6.86, as per WhoScored, so didn’t exactly struggle. So perhaps Bayliss is worth taking a chance on if the Magpies think he could be another Longstaff success story in the making.