Muto could benefit for Perez exit

McQueen made the suggestion when commentating on video footage of Newcastle United’s players returning to the club for pre-season.

The Magpies’ official website confirmed on Thursday that they had sold Perez to Leicester, despite him being the club’s top-scorer with 13 goals in the 2018/19 campaign.

While some may be sad to see Perez go due to him being among the goals last season, he averaged a goal every 229 minutes (Source: BBC), every cloud has a silver lining and in this case, it could be Muto.

When comparing Perez with Muto based on their Premier League stats from their 2018/19 campaigns, via WhoScored, it’s easy to see that the Spaniard regularly beat his 26-year-old teammate to the club’s starting line-ups. 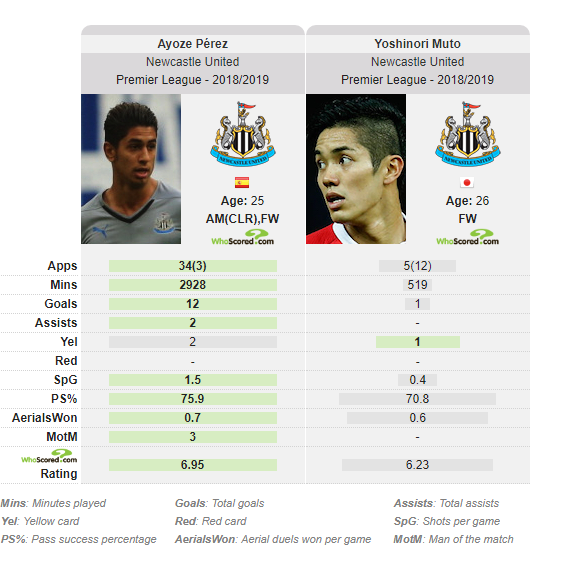 Perez played over four times the minutes Muto did in the Premier League as he racked up 2928 minutes compared to the Japan international’s 519 minutes.

So, therefore, it’s no surprise that Perez racked up more goals, more assists, more Man of the Match awards and was able to achieve a higher match rating due to getting consistent playing time.

While Muto fails to beat Perez in all but one category, yellow cards, if he was given more of a chance would that still be the case? After all the 26-year-old only completed 90 minutes on one occasion in the division.

However, what is pretty certain, is that McQueen is right to suggest Perez’s exit will benefit Muto.

After all, the Magpies will be without attackers Perez, Salomon Rondon, who was only on loan from West Bromwich Albion and potentially Joselu in the upcoming campaign.

Spanish outlet Mundo Deportivo previously reported Joselu was close to joining Alaves, and that would leave Muto with not much competition.

In fact with no Perez, Rondon or Joselu, Muto was actually the highest scoring centre-forward at the Magpies last season with one goal.

So it’s fair to say that unless new signings arrive shortly, Newcastle fans should get used to the idea of Muto regularly featuring now Perez has exited.