Simon Jordan explained why he told Newcastle United manager Steve Bruce to be brave after an angry Magpies supporter fumed over his remarks.

Jordan was on talkSPORT’s Kick Off show on Monday taking part in the Magpies boss’ interview with the broadcaster and ended his part in the interview by telling Bruce to “be brave”.

A Magpies supporter took to Twitter to fume over the two-words uttered by the former Palace chairman as they proceeded to claim how it highlighted football was one big boy’s club and Bruce was a well-liked member.

“Simon Jordan sign off to Steve Bruce, “Be Brave” Sweet ******* Lord. Give me the bucket I’m gonna hurl my guts up for about half an hour. Football is a ******* boys club. Bruce is a well-liked member with his picture on the wall. **** off. #nufc #AshleyOut,” wrote the Newcastle fan.

Jordan stumbled across the angry Newcastle fan’s remarks and stated that by telling Bruce to be brave, that what he was saying was that Bruce should fight to be his own man and challenge Magpies owner Mike Ashley where possible.

“By saying be brave … I meant; lead, fight and be ur own man and push Ashley…,” wrote Jordan on his verified Twitter account. 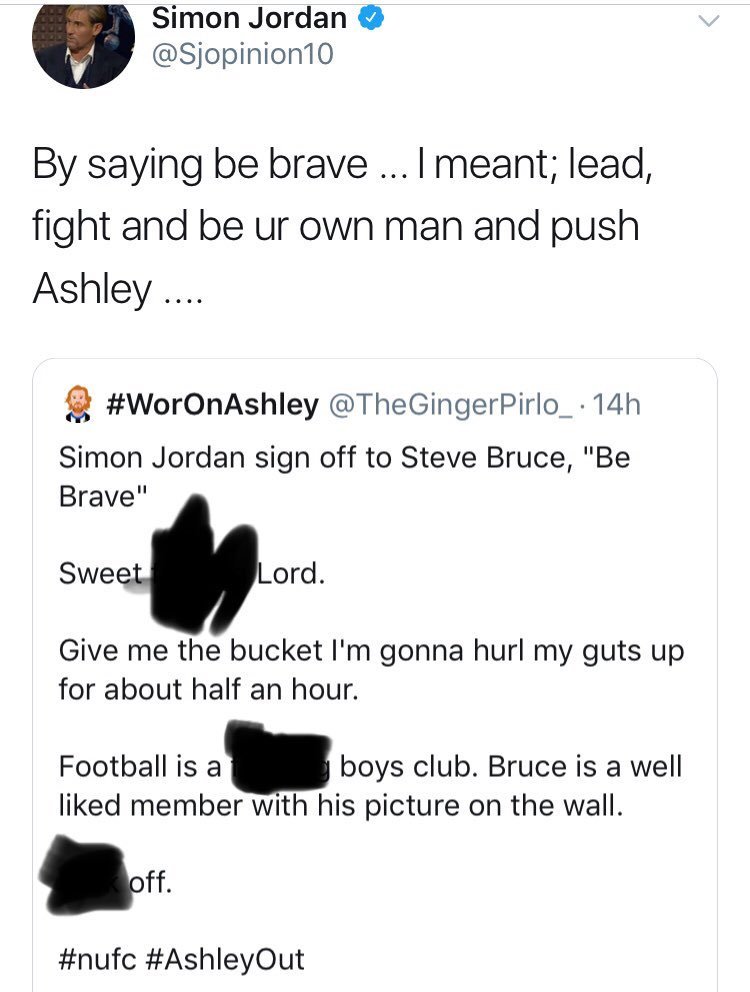 Jordan was very quick to clarify that he wasn’t supportive of Bruce being a yes man to Ashley or anything like that, but there’s no denying his remarks were odd. The former Premier League chairman is usually careful with his choice of words and telling a football manager to “be brave” is odd, as it’s not like Bruce is entering into a scary situation. Also aside from Jordan’s weird message to Bruce at the end of talkSPORT’s interview with the Magpies manager, it’s fair to say the interview shouldn’t go down well with the Magpies faithful. Bruce seemed convinced that Newcastle fans wouldn’t boycott despite their unhappiness over Ashley’s ownership and Rafa Benitez leaving the club, and surely that’s just ignorant on his part. While you can’t be 100% sure that a boycott will happen as the Magpies have a large, loyal and patience fanbase based on how they’ve still attended games in recent seasons, there’s surely at least a chance they won’t attend the Arsenal clash. After all news of a potential boycott has been well documented, with the Daily Mirror even previously reporting how nine fan groups had come together to plot a boycott.