Cundy believes Longstaff is worth £50m 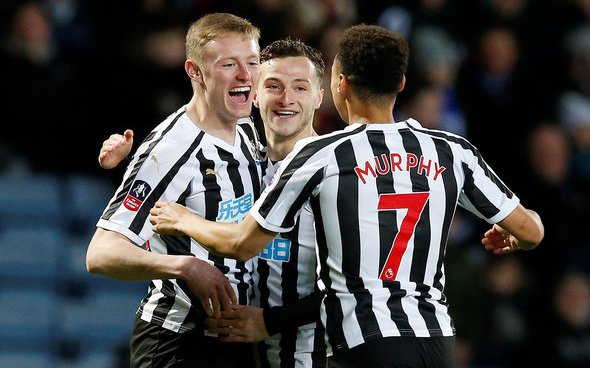 Adrian Durham asked Cundy about a report by The Sun that claimed Man United had been eyeing up the Magpies midfielder all summer long with the view of bidding £30million for him, but the talkSPORT personality was adamant he should be valued higher.

“If they’re spending £50million on Wan-Bissaka right, which is a lot of money, why they gonna go to £30million for Longstaff, surely you’ve got say if he’s £50million than Longstaff is £50million, haven’t you?” said Cundy on talkSPORT (18:24, Friday July 26th).

Durham shared that he thought Longstaff was fantastic last season but questioned Cundy’s £50million claim as he highlighted how little the Magpies midfielder featured.

“Sean Longstaff looked terrific whenever I saw him for Newcastle, he looked fantastic but it’s based on half-a-season,” stated Durham.

Cundy’s claim may raise eyebrows but it’s easy to see where he is coming from. Man United happily agreed a £50million deal, as per the BBC, with Palace to bring Wan-Bissaka to the club and he only made his debut for the London club last year. So why shouldn’t Longstaff carry the same price tag? After all the did impress upon breaking into the Magpies’ first-team last season and would have featured more if he hadn’t suffered a knee injury against West Ham. Longstaff played nine times in the Premier League in his 2018/19 campaign, helping the Magpies rack up four wins in his outings, and even racked up a goal during his displays. The 21-year-old averaged a very decent 32.56 passes per matches in his league outings and had a decent tackle success rate of 76% (Source: Premier League). So with that in mind, Cundy may soon be justified with his £50million claim as if Longstaff impresses in his upcoming campaign, then no one can question that he hasn’t featured enough to justify such a high valuation.