Half the time, when a group is trying to protest something, the hardest thing for them to do is get their voice heard by a wider audience.

They might be able to get up and running with a clear set of philosophies and aims, and they might even have some good early success with their campaign, but somewhere along the line they are bound to hit a ceiling, and at that point they must decide whether to stick to twist.

You feel that Newcastle United’s supporters are beginning to reach that stage of their efforts to oust Mike Ashley.

They have made their opinions abundantly clear, and they have done a decent enough job of mobilising the Toon Army against him, but the fact of the matter is that he still in charge, appointing who he wants, and ultimately carrying on as normal.

So that’s why it is more important than ever that the Magpies double down in their  efforts to get rid of him.

But judging by the latest Twitter update from Sky Sports reporter Pete Graves, things might not be going too swimmingly.

The journalist confirmed via his personal account that Sky would have cameras outside of St. James’ Park to film Wednesday night’s protest against Ashley, but aired his concern that not many supporters were planning to turn up. 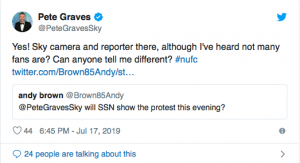 Now, obviously, people have lives, and the the Toon Army aren’t the be all and end all for everybody in the city, but if they really want to make a statement, they need to ensure that they are impressive when they get the opportunity to be.

How will it look if the cameras turn up and film a handful of Geordies shouting into a void?

The Toon Army have every right to feel aggrieved right now, but if they are to reach out to the watching world, they need to make a statement.