Championship side Sheffield Wednesday have yet to receive an official approach from Newcastle United for their manager Steve Bruce, according to journalist Adam Oxley.

The BBC Sheffield correspondent revealed the news on his personal Twitter account on Friday, claiming that the situation from Wednesday’s perspective remains unchanged.

Oxley claims that the Owls have not had any contact from the Magpies for the veteran boss, who is thought to be the front-runner for the vacant position at St James’ Park.

Indeed, Bruce took training on Friday at the club’s Middlewood training complex and has been busy around the second tier club despite the speculation. 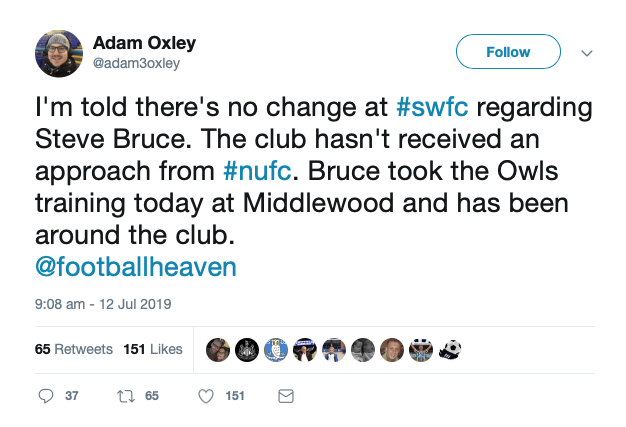 This Bruce saga just seems to go round and round at the moment, doesn’t it? There have been numerous twists and turns already, and this is the latest one from Oxley. He is obviously clued in on what is happening in the Sheffield area, and he says that Wednesday are yet to receive any official approach from Newcastle. Clearly the veteran manager is the number one target for the Magpies, but he is simply going about business as if nothing is going on. Obviously if the Magpies want Bruce then they are going to have negotiate a compensation fee with Wednesday. However, if they’ve not even made an official approach yet then that’s clearly a long way off at present. Bruce has been thought of as Newcastle’s manager-in-waiting for a few days now, yet tangible progress on a deal has appeared to be extremely slow in coming. It’s all over the place at the moment, so who knows what shape Newcastle will be in for the start of the new season?