National journalist Alan Nixon has cleared up the confusion over Newcastle United’s cut-price move for Amiens right back Emil Krafth.

Nixon wrote a piece on The Sun’s website on Saturday that said that the Magpies are looking to sign the 20-cap Sweden international for £1million, despite the French side signing him for double that earlier this summer and looking to secure a profit.

Nixon’s reply to a fan provided the situation with a bit more clarity: “Why can’t people make sense. NUFC value him at 1m. The club won’t sell for less than the 2m they paid and in fact want more. So NUFC are way off the valuation. How does it not make sense??,” said a Twitter user. 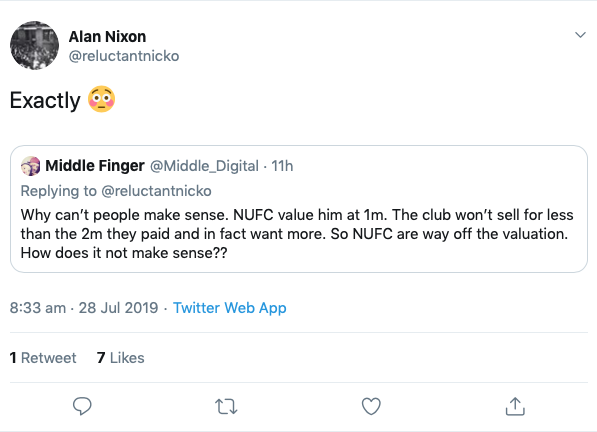 Yeah, it’s difficult to understand where the confusion was from the Newcastle fanbase. It seems pretty clear that what Nixon was saying all along is that Newcastle are interested in signing Krafth and want to get a deal done cheaply at just £1million. However, Amiens have already paid double that to make the Swede’s loan deal permanent earlier this summer, and so they’re only really looking to sell him if they can secure a big profit. That’s not what Newcastle are offering, though, so it’s unlikely that this is a deal that’s going to get done any time soon, unless there’s a dramatic shift in the Magpies approach to it. Steve Bruce is right to be looking at a new right back, because neither DeAndre Yedlin nor Javier Manquillo particularly performed with distinction last time out. They’re both decent enough players, but they have clear defensive deficiencies that make having either of them as your starting right back in the Premier League slightly problematic.