Hoffenheim striker Joelinton remains somebody Newcastle United are interested in signing despite former manager Rafael Benitez’s exit, according to The Chronicle.

The newspaper claims that while a host of other young strikers from the continent have been scouted by the Magpies, the 22-year-old stands out a potential signing.

Journalist Chris Waugh revealed in a Chronicle Q & A [26/05; 12:29] in May that the north east giants would be willing to spend up to £40million on the Brazilian.

Waugh’s colleague Lee Ryder told the same publication in June that Benitez was unsure on the merits of signing Joelinton. However, since his departure the move may be back on.

Joelinton is someone whose name seems to keep cropping up in connection with Newcastle. He’s clearly someone who the club have looked at and liked the look of for some time now, though it’s worth noting that Benitez wasn’t overly-enamoured about the prospect of spending £40million on him when there are so many other holes to fill in this Magpies side. That remains the case, although after the loss of Salomon Rondon and Ayoze Perez, the attack is probably the area that they most need to strengthen. So Joelinton could be the man for them. When you compare him to the one senior centre forward who is currently expected to be at St James’ Park next term, Dwight Gayle, he seems to compliment the Englishman rather well. As per WhoScored, Gayle scored more goals and had more shots per game, and was fouled more and dispossessed less per outing. However, Joelinton grabbed more assists and had a superior key passes and dribbles per game ratio. That would suggest that the Brazilian provides the creativity to compliment Gayle’s poaching style. What’s not to like? 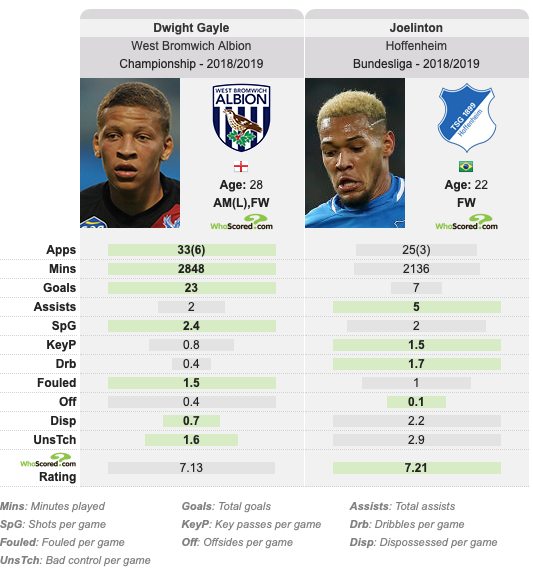