If Newcastle United don’t manage to sign Salomon Rondon on a permanent basis, as looks more and more likely, then they will need to bring in a new top class frontman this summer.

To go into next season with just Dwight Gayle and Joselu as orthodox number nines would, with all due respect, be a competitive disaster.

Instead, they should consider pulling the trigger on their mooted interest in Sporting Lisbon striker Bas Dost. Portuguese outlet O Jogo reported recently that the Magpies, along with Spanish heavyweights Sevilla, are interested in the 30-year-old this summer.

The big thing here, though, is that the Dutch international would be an absolute bargain. O Jogo’s report states that Sporting merely want to recoup the £10.7million they paid German outfit Wolfsburg for his services in 2016. At that price, Dost would be a dream for a team like Newcastle who are in desperate need of more firepower.

Yes, he’s past the Magpies’ usual age limit for new signings, but there’s no doubt he’s a proven goalscorer of the highest order. He bagged 23 goals in all competitions last season, including 15 in 22 games in the Portuguese top flight.

A comparison between Dost and Rondon makes for interesting reading, it must be said. As per WhoScored, the Venezuelan leads his Dutch compatriot in assists, and average shots, key passes and dribbles per game.

However, Dost is superior in the number of offsides called per game and how often he is dispossessed and has unsuccessful touches. Plus, he scored four more league goals than Rondon in 1000 or so fewer minutes of game time.

So while the Dutchman isn’t as creative as the current West Bromwich Albion star, he is more in tune with the intricacies of modern centre forward play. Besides, the Magpies have the likes of Miguel Almiron, Sean Longstaff, Ayoze Perez and Matt Ritchie to provide the chances that Dost would invariably gobble up.

So while Rondon likely remains the dream centre forward signing for the majority of the Newcastle faithful, it’s perhaps time that the club put all their eggs in Bas’s basket this summer. 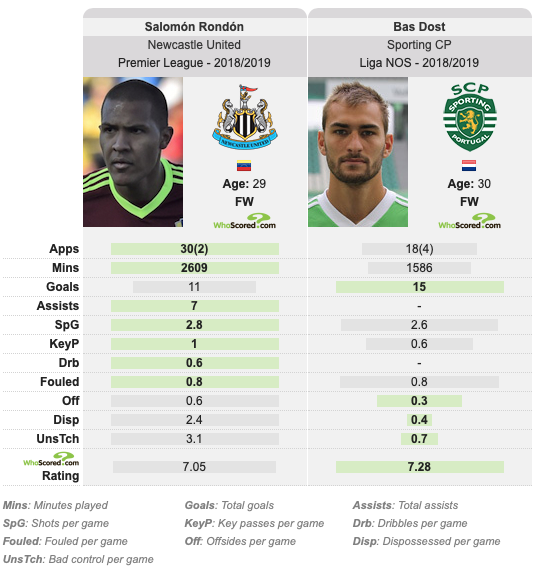