While there’s no arguing with the fact that after the losses of Salomon Rondon, Ayoze Perez and Joselu, attack is the area of the pitch most in need of improvement for Newcastle United, right back is a problem position for the Magpies as well.

Neither DeAndre Yedlin nor Javier Manquillo truly distinguished themselves in the right wing back slot last season, with the Spaniard taking the starting spot from the former Tottenham Hotspur man towards the back end of the campaign.

And new Toon boss Steve Bruce has seemingly identified the area as a weak spot, as well. The Daily Mail reported on Saturday that the Magpies are looking at bringing former player James Tavernier back to the club this summer.

It’s thought that Rangers would have to consider bids in the region of £8million for their club captain, a sum more than within the reach of a Premier League side like Newcastle.

It’s unknown at this time whether or not Bruce will opt to stick with the three man central defensive unit with two wing backs that proved so successful under his predecessor Rafael Benitez last season. However, if he does, then Tavernier is the perfect recruit and the club should pull out all the stops to bring him back to St James’ Park.

This is a man who, despite being a right back, was involved in 37 goals in the last campaign, scoring 17 times and registering 20 assists for Steven Gerrard’s side [Source: Transfermarkt].

Those are incredible numbers for a defender, even if plenty of those strikes were penalties. The fact remains, though, that getting 20 assists in a season is highly unusual for a full back.

Tavernier’s offensive ability makes him an ideal fit for the wing back position, where less defending is needed. He’d be covered by the right sided centre back most of the time, in this case Fabian Schar.

Plus, there’s no doubt that he’d be an upgrade on both Yedlin and Manquillo. As per WhoScored.com, the pair were involved in a combined six league goals last time out. Furthermore, they registered just 1 and 0.5 key passes per game respectively, and 0.4 and 0.1 shots per game.

Clearly Tavernier is the superior option, here, which is why Bruce would be wise to follow up his interest with an official bid for the former Magpie. 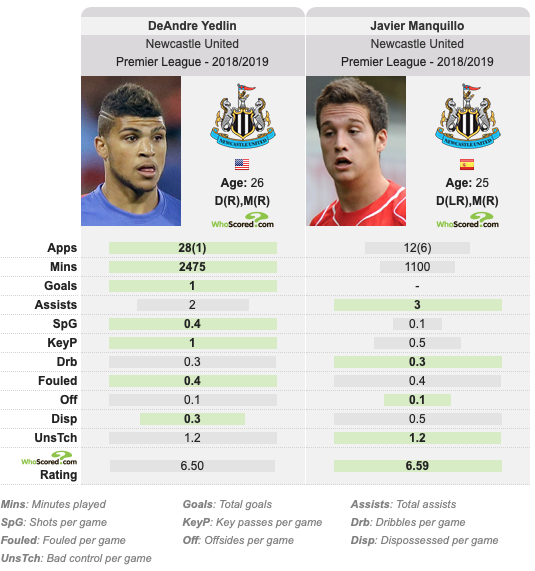