Newcastle must keep hold of Gayle

The striking situation at Newcastle United is all over the place at the moment. The team’s reigning Player of the Season Salomon Rondon is no longer at the club, and everything is up in the air as a result.

One thing the Magpies don’t need to do right now is sell striker Dwight Gayle. The 28-year-old spent the past campaign on loan at West Bromwich Albion, and now former England international Darren Bent is urging his old club Aston Villa to sign him this summer.

“If you’re going to sign someone like a Dwight Gayle you’ve got to play him week in, week out and he’s maybe one I’d look at. If there’s an opportunity there maybe I’d maybe look there to try and get him in,” he told Football Insider.

The problem for Newcastle there is that, sans Rondon, they really have no top class frontmen available other than Gayle. The Venezuelan international is back at The Hawthorns and Ayoze Perez has just been sold to Leicester City, which leaves a huge void at the sharp end of the pitch at St James’ Park.

At the moment, the three attackers Newcastle can count on are Gayle, Joselu and Yoshinori Muto. When you look at how each man performed last term – albeit the Englishman was doing it at a level below in the Championship – Gayle far outperformed the Magpies duo.

As per WhoScored, he scored 24 goals last time out, compared to a combined three from Joselu and Muto. He also had the most assists, the most shots per game, key passes per game and drew the most fouls per game.

Clearly he is the most clinical, but he’s also the most creative of the three. That’s important when the team have just lost one of their most inventive players in Perez.

So at this moment in time, and until the club bring in more attackers, Newcastle must ignore Bent’s calls for a move away from Gayle and keep him where he is. Shunned by Rafael Benitez last summer, the former Crystal Palace man is now a vital figure at St James’ Park. 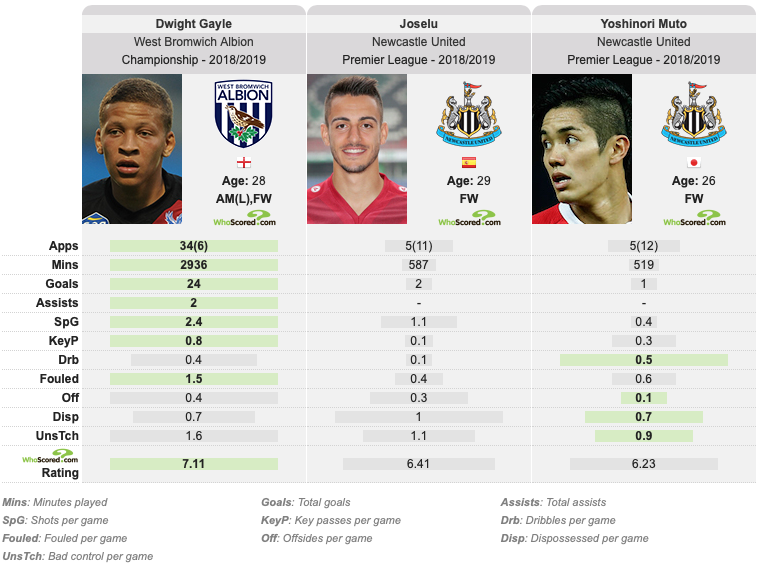