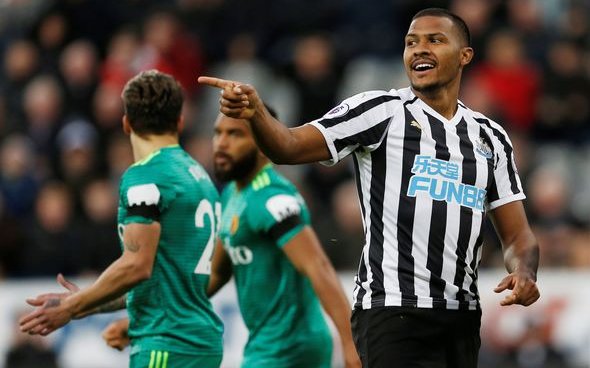 Newcastle United made a move late last season to try and secure West Bromwich Albion striker Salomon Rondon on another loan deal for the 2019/20 campaign, according to the Shields Gazette.

The newspaper claims that the Magpies attempted to get another temporary deal over the line for the 6ft Venezuelan international [Source: Transfermarkt], but that the Baggies were having none of it.

The 29-year-old currently has only a year remaining on his West Brom contract, and so they were in no mood to essentially agree to lose him for nothing when his deal ends.

The manager-less Magpies are now in a battle with their Premier League rivals West Ham United and Wolverhampton Wanderers for the player’s signature.

This is an interesting revelation from the Gazette, isn’t it? To be honest, trying to sign Rondon on another loan deal makes sense from a Newcastle perspective and how we’ve come to understand the club under owner Mike Ashley. The Sports Direct tycoon is always unwilling to spend money when he can avoid it where Newcastle are concerned, while his policy has always been to try and sign young players with high potential sell on values. Rondon, at 29 years of age, doesn’t really fit that criteria. So it makes sense that the Magpies would try and get him in on just a loan deal where they pay only his wages and perhaps a minor loan fee. The club would then have been able to sign the Venezuelan for free a year later, thus saving money on a transfer fee for a then-30-year-old player. However, West Brom rightfully rejected their approach, seeing that it would be a nonsensical thing to do from their point of view.