There is definitely a certain amount of merit to  a club appointing a manager who used to play for them. Look at the way that Pep Guardiola and Zinedine Zidane both flourished over in Spain, or how Ole Gunnar Solskjaer was able to get his Manchester United squad all singing off the same hymn sheet last season – for a while at least anyway. The concept isn’t an entirely alien one on Tyneside either. Both Alan Shearer and Kevin Keegan have managed the club in the relatively recent past, although it’s fair to say that one of those legends did decidedly better than the other during his spell in the dugout. Right now though, Newcastle United are arguably facing their biggest period of uncertainty in several years. With Rafa Benitez gone and no sign of any transfer activity for fans to get excited about, not to mention the looming spectre of Mike Ashley hanging over the club, this is a nervous summer for the Toon Army. But some fans are calling on an old hero to help them get out of their slump. Nobby Solano is part of the coaching staff that have masterminded Peru’s run to the Copa America final, and many supporters are convinced that he could be the man to save the Magpies. The South American has only held the single job as a number one, managing Jose Galvez for 14 matches and amassing a pretty dire points per match ratio of 0.71 [Transfermarkt]. That was six years ago though, and maybe some thinking outside of the box is what is required in the north east right now. 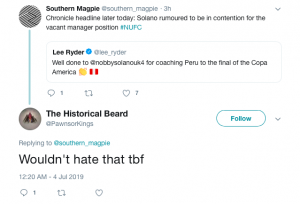