After the couple of weeks they have had, you can understand why Newcastle United fans are clinging onto any and all suggestion of good news coming their way. With Rafael Benitez gone and the squad managerless, there will be plenty of nerves on Tyneside, not to mention anger over how ill-prepared the club are heading into pre-season. With everyone still in the dark over where, or if, the potential takeover stands, there has not been an awful lot to cheer for the Toon Army – although former Geordie Shore star Greg Lake seems to think there is some good news on the horizon for his fellow supporters. The reality TV figure claimed in an optimistic tweet that there are two things to look forward to in the near future, the message ending with a cryptic message of a “new signing but not new.” It was this small snippet, coupled with Lake including “#R” at the end of the social media post, which had many of the Newcastle fans guessing as to what he meant. Some seemed to believe it could relate to the return of Salomon Rondon, others suggested it could mean something to do with the return of Rolando Aarons after his loan spell away. Others joked it could be former flop Emmanuel Riviere making a comeback or Ryan Taylor as manager – at least they are not losing their sense of humour during what is a frustrating time for all at St James’ Park.

Nothing but Newcastle has picked out some of the Toon Army’s tweets reacting to the optimistic message: 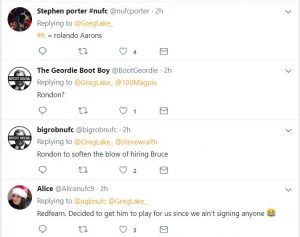 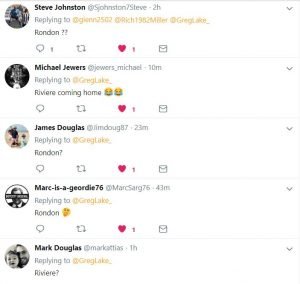