At this stage, Newcastle United fans mustn’t know whether to laugh or cry. With Rafa Benitez gone, no new manager lined up, no new signings anywhere to be seen, the reported takeover seemingly hitting the skids, and Mike Ashley looking as if he could be settling in for another season at the helm, the circus that has rolled into their club shows no sign of moving out any time soon. The atmosphere is tense on Tyneside, as boycotts loom and frustrations bubble, and ordinarily you would expect a club to respond with a measure of trepidation and decorum. Unfortunately, Ashley does not know the meaning of either of those words, and so he continues to run the club with subtlety and nous of a sledgehammer. The latest revelation to pour fuel on the inferno of supporter anger is the announcement that the club’s new home kit has gone on sale, as confirmed via the Toon Army’s Twitter. Normally, that wouldn’t be anything to write home about, and to be fair to Puma, they’ve really pulled it out of the bag with this year’s shirt. At the moment, however, with things the way they are, the timing and unwillingness to take into account the mood of the Geordie faithful seems nothing short of insensitive, and potentially even deliberately incendiary. 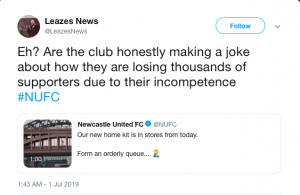 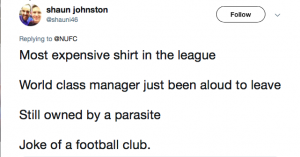