You can bet money that whenever something significant happens on Tyneside, one of the first journalists to pipe up with an opinion is Richard Keys. The beIN Sport presenter seems to be obsessed with the situation at St. James’ Park at the moment, and he has spoken out on more than one occasion in the recent past about Newcastle United’s fortunes. None of that, objectively speaking, is particularly wrong. At the end of the day, Keys is supposed to be a journalist, and it is it job of a reporter to find news, share it, and offer critical analysis when needed. The real issue, however, is that Keys’ opinions are consistently and concerningly wide of the mark. Take his latest offering on Mike Ashley’s interview with the Daily Mail. In the piece, the controversial owner takes aim at Rafa Benitez, claiming that it would have been impossible to keep the Spaniard on as manager this summer, and also suggesting that he could own the Magpies for the foreseeable future. It was interesting to finally hear from the man behind the drama in the north east, but honestly, the article read more like an Ashley-approved press release at times. Unsurprisingly, it didn’t take Keys long to chip in with his own misplaced opinion, claiming that he had tried to tell supporters that Benitez always puts himself first, and basically accepting every word of Ashley’s view as the gospel truth. It’s fair to say that Toon fans aren’t best pleased by the comments, and who can really blame them? 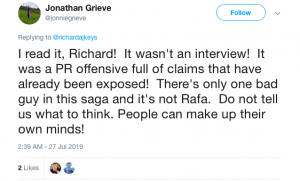 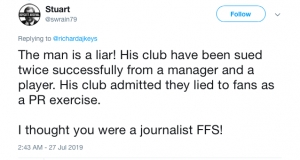