Newcastle United fans are fiercely loyal. If you put your heart and soul into everything you do on Tyneside, and if you prove that you are the sort of person who can be relied on, you will discover a fanbase who will support you for life. And that’s exactly what Rafa Benitez can expect in the north east, despite the fact that he has now left Newcastle for a job in China. The Spaniard was unable to agree new terms on a contract extension at St. James’ Park, and honestly, you will struggle to find many Toon fans who blame him. With Mike Ashley at the helm, conditions for a manager are incredibly difficult, and Benitez himself stated in his leaving statement that he wanted to stay but wasn’t assured by those at the top of the club that they could match his ambitions. A lot of people will be sympathetic to that, but one man who isn’t is talkSPORT pundit Simon Jordan. The former Crystal Palace chairman has spoken out against Rafa, claiming that he isn’t a fan, and that the Spaniard left because he couldn’t get his own way. Aside from the fact that he has massive oversimplified the issue, Jordan also misses a fundamental point. Even if Rafa did leave because he couldn’t get what he wanted, what he was searching for was ultimately what is best for the club. Ashley is in the wrong, and as such, so is Jordan. 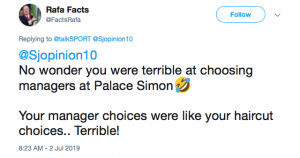 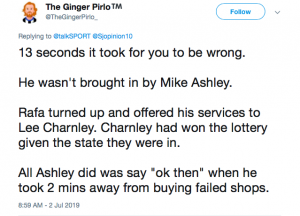 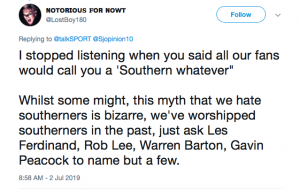