It’s hardly the big name appointment that Newcastle United fans will have been hoping for, but it looks as if the Magpies could be on the verge on tying up a deal to bring Sheffield Wednesday manager Steve Bruce to St. James’ Park. As reported by the BBC, the former Sunderland boss is being considered for the vacancy in the north east, and speculation surrounding his potential arrival seems to be gathering momentum at a healthy pace. Admittedly, there is nothing wrong with Bruce as a manager. He is a steady figure who has average around 1.6 points per game in his last two posts, as reported by Transfermarkt, and there are probably an awful lot of appointments that the Magpies could make that would leave them in far worse shape. But he is hardly a man to get the pulse racing, and far less a suitable replacement to fill the Geordie faithful with hope following the departure of Rafa Benitez. According to talkSPORT pundit Simon Jordan, however, he could be the ideal man for the job. Speaking on the station, he claimed that Bruce was not only a good fit, but just about the best that United could hope for given their present circumstances. No offence to Bruce, but that seems wrong. This is a massive Premier League club, admittedly facing a tricky spell, but nonetheless capable of attracting a more illustrious manager than one picked from the middle of the Championship. Jordan is wrong on this one. 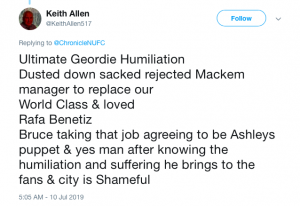