Newcastle fans react as they close in on Kyle Scott

Free agent Kyle Scott is reportedly closing in on a move to Newcastle United. According to Football Insider, the former Chelsea midfielder is scheduled to undergo a medical with the Magpies before joining on a free transfer. With all that is going on at St James’ Park at the moment in regards to the club’s ownership and management situation, fans can be forgiven for not really caring about this deal. Although a couple of supporters think that Scott, 21, is going to be a good addition, others are struggling to get excited by the reportedly imminent signing because of him being more of a Under-23s player than a first team one. Newcastle have bigger issues than adding to their Under-23s squad, unless there is a view for Scott to play in the senior squad next term. That would be surprising, even by Newcastle’s standards, as Scott only made one senior appearance for Chelsea and has only had one loan spell where he played at Dutch side Telstar.

Free transfer – that’s 50% of the new managers budget gone. (Didn’t we get that line with Ba?)

Cute signing for the u23

Someone needs to get in touch with this Kyle Scott fella and tell him not to bother with us. Pointless signing for a dead club. #nufc 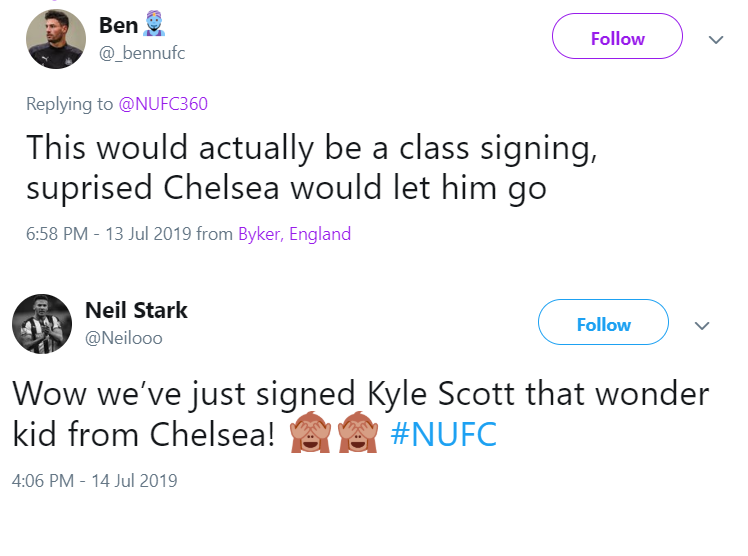