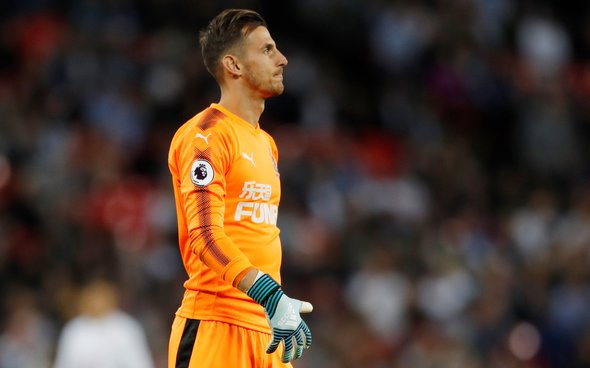 Newcastle United are adamant that goalkeeper Martin Dubravka will remain at St James’ Park next season, according to the Daily Star.

The newspaper claim on their website that the Magpies are confident of hanging on to the ever-present 30-year-old, even though German outlet Kicker recently reported Paris Saint-Germain to have an interest in the Slovakian international.

The Chronicle has recently revealed that new manager Steve Bruce is readying contract extensions for certain members of his squad, with the £38,000 per-week ace [Source: Spotrac] potentially one of those in line for a new deal.

This would the best possible news for all Newcastle fans, who will have been surely thinking the worst when French giants Paris Saint-Germain were interested in their marquee stopper. Dubravka has had a massive impact inbetween the sticks at St James’ Park, and it comes as no surprise that another club have reportedly taken an interest. Newcastle have the power in any deal though, with the 30-year-old tied to a contract until 2022 in the North East and a new and improved contract with higher wages should be more than enough to cement his place in the Magpies side for many years to come. Dubravka has the benefit of Newcastle not having many other back-up keepers capable of stepping up to the first-team fold. Both Freddie Woodman and Karl Darlow have struggled for minutes in recent seasons due to the domination of Dubravka in goal, and it would be a big risk to rely on either of those two. It is always vital to tie your best players to new contracts when possible and it would be a great decision by Bruce to secure the future of Dubravka as quickly as possible.