It’s safe to say that Newcastle United winger Jacob Murphy has underwhelmed since making the switch to St James’ Park from Norwich City a few years back.

He has shown occasional flashes of real potential, but for the most part he frustrated former manager Rafael Benitez throughout his time on Tyneside.

That was shown by the Spaniard’s decision to loan him out to Championship side West Bromwich Albion in January, where the common consensus was that he never really got going.

On Wednesday, the 24-year-old was included in The Chronicle‘s list of Newcastle players who need to impress during the team’s participation in the Asia Trophy in China this pre season.

Indeed, Murphy must pull out all the stops in the Far East or face another season of stop-start football with the Magpies, playing a bit part role and consequently failing to make the progress expected of him.

If the Englishman can do well in pre season and impress new manager Steve Bruce, then he could earn himself a spot in the new man’s starting line up. Ayoze Perez and Kenedy are now more at Newcastle, while Christian Atsu is out injured, so there is a real opportunity for Murphy to make a starting spot his own.

He’s certainly capable of doing that, especially when you consider that his time with the Baggies wasn’t anywhere near as bad as some people made out.

As per WhoScored, he improved in all but three major statistical offensive categories with West Brom over the second half of last season as opposed to what he did in the first half of the campaign with the Magpies.

Perhaps he didn’t do quite as well as Newcastle fans expected given that he was playing at a level below the Premier League, but he did make some valuable progress.

Now, if he can carry that improvement into the pre season trip to China, then Murphy could well work himself into Bruce’s first team plans next time out. 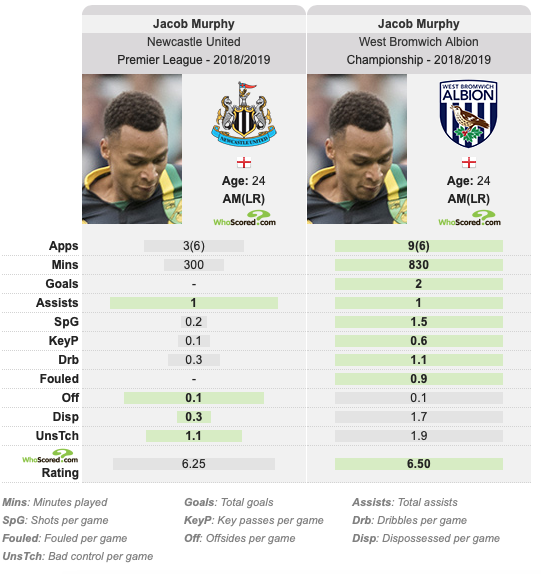